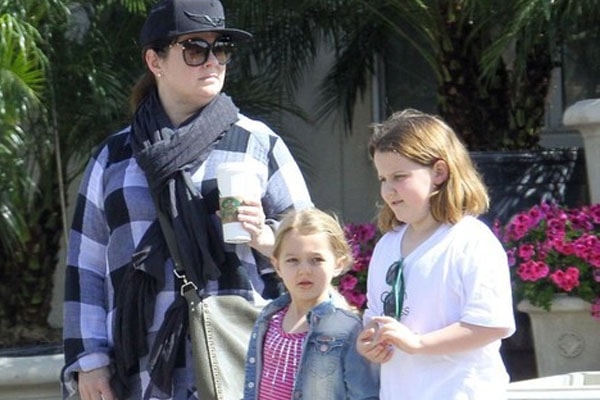 The American comedian parents, Ben Falcone and Melissa McCarthy’s daughters, Vivian and Georgette Falcone, were born on May 5, 2007, and March 22, 2010, respectively. The family shares an intimate and strong bond.

The comedian couple and proud parents, Melissa and Ben, walked down the aisle on October 8, 2005, in an auspicious ceremony. The lovely siblings, Vivian and Georgette share a blissful home in Los Angeles, California with their parents.

Having almost the same physical appearance or resembling mother in any way is a not anything a teenage girl would be proud of. However, in the case of Vivian, she is cashing in on the perks of looking like her mother. The young Vivian was earning $880 a day for playing the younger version of her mom’s character in the movie, “Michelle Darnell”.

The eldest daughter of the family not just has a passion for acting like her mother, but also loves interior designing like her mother. The proud mother of two quirky daughters, Melissa, cannot stop gushing about her beautiful baby girls. Mother Melissa recalls an incident while trying out a new bedspread. Despite Ben is not necessarily happy with a designer daughter, for Melissa, having a child with a strong sense of aesthetics fills her heart with joy.

The youngest daughter of the comedian, Georgette Falcone, was born on March 22, 2010, as the little sister of  Vivian Falcon. Despite the small age, the young celebrity has already started following her parents’ footsteps and has entered the movie industry. The now-eight years old Georgette has hit the limelight with her debut movie “The Boss” alongside her mother and sibling, The daughters surely have the showbusiness genes, however, mother Melissa is focused more on their education and insists to continue.

The little Georgette also has an obsession with makeup, despite her young age. The Gilmore Girls alum revealed that she keeps an eye on Georgette because she is way too enamoured with makeup.

The cognate of the French “Vivien” is a lovely name from the Latin Vivianus, which means “alive”. Despite being a male name, the name is occasionally bestowed upon females in Great Britain. Furthermore, the alternate spelling Vivien is the more common form of the name.

The French baby name Georgette is a lovely name for a baby girl. The French feminine form of the Greek George “Georgette” means “tiller of the soil” or “farmer”.