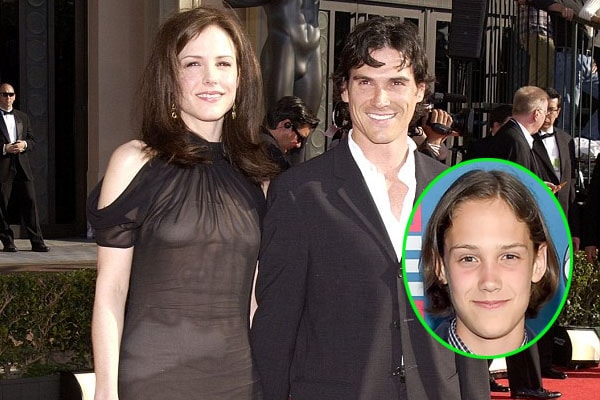 The Hollywood actress Mary- Louise Parker was pregnant with seven months old William when Billy Crudup dumped her and dated actress Clair Danes. The ex-couple Billy and Mary-Louise dated from 1996 to 2003. Now, Billy is known to be dating his Gypsy co-star, actress Naomi Watts.

Although William Atticus Parker did not get to live with both his parents, we can say for sure that his mother Mary-Louise Parker raised him with all the love he needed. He is so fortunate to have such a strong and lovely mother. Actress Mary-Louise also feels blessed to have William as her son. She truly appreciates her son William’s birth and he is the dearest to her.

Back in 2004, when Mary-Louise received the Golden Globes Award for the best-supporting-actress for her role in Angels In America, she thanked her son William in a humorous way.

The gorgeous actress Mary-Louise Parker turned the family of two into the sweet family of three. She adopted an Ethiopian baby girl Caroline Aberash Parker back in 2007. Mary-Louise Parker is such a wonderful and thoughtful mother for making it possible for William to have a lovely sibling Caroline.

Billy Crudup’s son William Atticus Parker can be rarely seen in the limelight. However, William has attended several movie premiers together with his mother, Mary-Louise Parker. Although William’s parents ended their relationship on bad terms, we guess he has a good relationship with both of his parents. Because he spends some time with his father Billy Crudup too.

William is all grown up and is loved by his parents. This was one of the pictures taken of father Billy and son William when they were spotted walking in the street of New York City on April 25, 2015. William was holding his father’s hand and walking down the street. This is evident enough to show that though Crudup has no relation with his mother Mary, Billy is in touch with his kid and Mary had no objection with that.

The name William is a name for a boy. William is derived from two German words ‘willeo’ which means will or determination and ‘helm’ which means protection or helmet. Similarly, Atticus is a Roman nickname which means man of Attica.