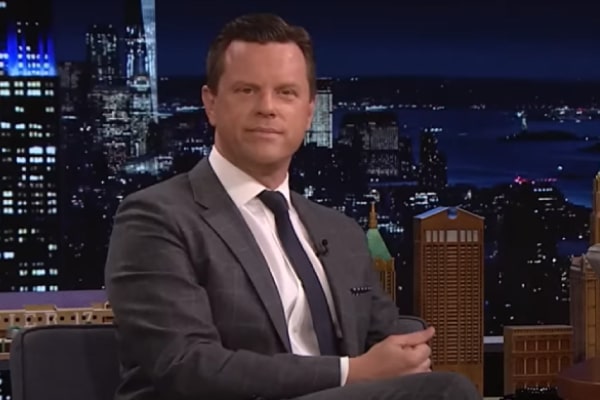 Together with his wife, Willie Geist is a proud parent of two. Image Source: Social Media.

Born William Russell Geist, Willie Geist, is a well-known journalist and TV personality. He is the co-anchor of MSNBC’s Morning Joe. In addition, the talented host often works as a fill-in anchor on both weekday editions and the Saturday edition of the American news and talking program, Today. With his career stretching over two decades, Willie has accumulated enormous fame and fortune in his career.

Apart from his flourishing professional life, the Illinois native is a married man with kids. The famous personality shares his babies with his high school sweetheart, Christina Sharkey. So, in today’s article, let’s learn more about Willie Geist’s children. Keep reading!

As stated above, Willie and Christina Geist have been happily married for decades. After going out for a long time, the high school sweethearts exchanged their wedding vows on 24 May 2003. Following that, the married duo welcomed their first baby, a daughter, Lucie Joy Geist on 14 June 2007. Then, their son, George William Geist arrived on 08 July 2009.

Despite their parents’ busy schedules, the Geist brother-sister spends a lot of quality time with them. In an interview with MSNBC in 2019, the anchor said he works six mornings per week. Thus, he makes it a priority to be home with his family at night. The doting dad further added he has been doing a good job by saying “no” to things at night for the past few years and making that crucial time not doing anything extravagant.

Instead, the media personality has been spending time with his babies and having dinner. Furthermore, when they were younger, he gave them bath and read to them. The MSNBC anchor said the day is all work time, but the night is for the family. Willie Geist’s children are fortunate to have such a loving father.

Also Read: How Rob McElhenney’s Children Are Growing Up

Their Mom Quit Her Job To Take Care Of Them

When Lucie was three and George was one, their mother put a white flag on her corporate job and decided to stay at home with them. Christina said that time was really tough as her husband’s career went on a vertical trajectory. So suddenly, they felt they were no longer equal in terms of their professional life.

But, later, the anchor’s spouse added that was the phase of their life where they made the best decision. Later, when George turned five and went to Kindergarten, Mrs. Geist re-evaluated her decision and chased a few of her dreams. That includes writing two bestselling children’s books.

Talking with The Local Moms Network,  the Geist siblings’ mother said George has an advanced sense of humor, and Lucie has an adult appreciation of music. As per Christina, the brother-sister inherited those traits from their father.

Furthermore, in the same interview, the Geist couple disclosed that their kids are not overly impressed by their careers. The married duo added George and Lucie have their own lives like all other children. But sometimes they get to enjoy something extraordinary moments. In another talk with Bethenny Frankel, the anchor hilariously imitated how the brother-sister duo used to react whenever they would see him on TV.

When Willie started on the Today Show, One Direction was playing on the plaza at the height of their mania. The youngest Geist rocked out to the band on his full tux. At that time, 2 1/2-old George had just been to his aunt’s wedding and had been told if there was a big moment, you wear a tuxedo. So, he wore a tux at that time.

Additionally, the ideal weekend for the anchor is going to central park and getting together with family. Meanwhile, the best weekend for Christina is when the four of them hit dinner.

Nonetheless, Willie Geist’s children are growing up surrounded by all the love and care of their parents. We wish them a happy childhood and a successful career ahead.

George is a name of Greek origin that means Farmer or earth-worker. Likewise, William is an English name that means Resolute Protector or Strong-willed warrior.

On the other hand, Lucie is a Latin name that means Light. Meanwhile, the beautiful name Joy means Happiness.