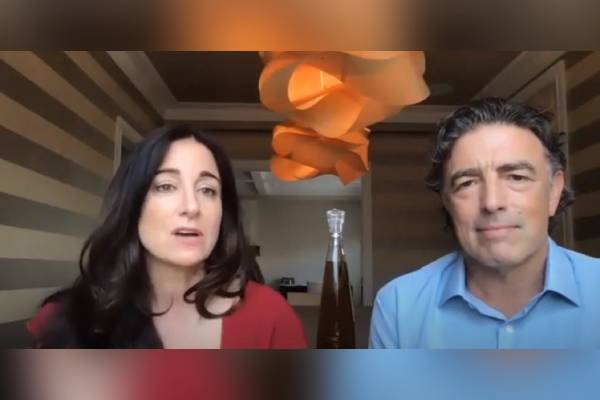 If you are the one that keeps day-to-day updates of National Basketball Association (NBA) matches, you might have heard about Boston Celtics. The name that comes along with the team is Wyc Grousbeck. Born Wycliffe K. Grousbeck, Wyc is an entrepreneur who owns the Celtics. He is one of the well-known names in the business world.

Talking about his personal life, the Boston Celtics owner is married to Emilia Fazzalari. The couple tied the knot on January 7, 2017, and have been enjoying blissful marital life. So, naturally, fans are eager to know if the owner and his wife have any kids together. So, without further ado, let’s know more about Wyc Grousbeck’s children.

Wyc Is A Father Of Two

As mentioned earlier, Wyc shares a blissful marital life with Emilia Fazzalari. Before tying the knot with her, he was married to Corinne Grousbeck. Furthermore, the Celtics owner welcomed two children, Campbell Grousbeck, and Kelsey Grousbeck with his first spouse.

In addition, as per Boston Globe, Campbell and Kelsey’s stepmother, Emilia also has two children of her own. However, she has not revealed much information about them and has kept them away from the public eye.

Although it has been a few years since the Grousbeck siblings’ parents got married, the couple is yet to welcome kids of their own. Nevertheless, they love to dote on Kelsey and Campbell.

Campbell Grousbeck Has A Visual Impairment

Wyc Grousbeck’s son, Campbell Grousbeck, was born in 1993. He had a serious visual impairment at the time of his birth. He did wear glasses on the chance that his vision might get improved, but that did not happen. As a result, Campbell was treated differently by people from a very young age. His mom, Corinne, then led BlindNewWorld, a social change campaign to break social and emotional barriers between sighted and visually impaired people.

Wyc’s son has also not made many media appearances. Hopefully, he is doing well career-wise and in his personal life.

On the other hand, Wyc Grousbeck’s daughter, Kelsey Grousbeck, is a married woman. On July 15, 2018, she shared wedding vows with Matt Cosby at Camp Jabberwocky’s beach spot. She had been volunteering there since the age of 13 and was inspired by her visually impaired brother.

Moreover, Kelsey also currently works as a counselor at the camp. She previously served as a Market Research Analyst at Perkins School for the Blind. In addition, she holds a Master of Business Administration from Boston University’s Questrom School of Business.

Campbell And Kelsey’s Dad And Stepmom Are Involved In Business

As mentioned earlier, Campbell’s dad, Wyc, made a name for himself as the owner of the Boston Celtics. Besides that, he is also involved in many businesses with his second wife. Campbell and Kelsey’s stepmom and dad, along with Michael Jordan, Jeanie Buss, and Wes Edens founded Cinco Spirits Group LLC. Emilia is the co-founder and CEO. Their brand, Cincoro Tequila is an award-winning brand.

Prior to that, Kelsey’s stepmom worked at Moody’s Investor Service, Bloomberg L.P., and Poten & Partners. She held several high positions in these organizations. Furthermore, Kelsey and Campbell’s parents named a new dormitory in one of the residential colleges that are being built at Princeton University, Grousbeck Hall. Their giving nature has been praised by many.

Nonetheless, Kelsey and Campbell might have a good relationship with their stepmother. The kids must be living a comfortable life away from the media. Furthermore, they must be close with their grandparents H. Irving Grousbeck and Sukey Grousbeck.

Overall, Wyc Grousbeck’s kids must be doing well. They must be living a wonderful life away from media scrutiny. Let’s hope we get to hear more about them in the days ahead.