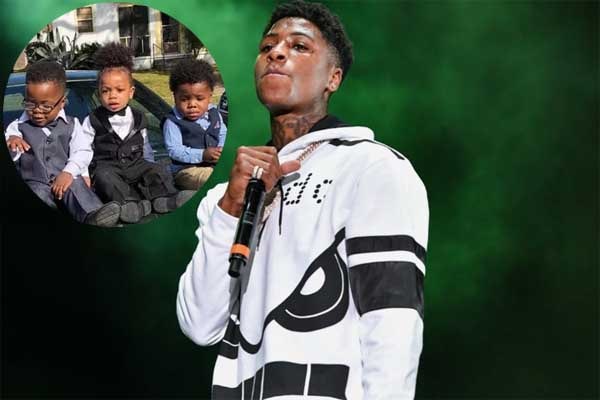 NBA YoungBoy is not only a talented rapper but also a proud father of five. Image Source: Getty Images.

NBA YoungBoy’s son Kayden Gaulden is his eldest, born on July 4, 2016. He fathered his first child at the age of sixteen with his ex-partner Nisha. NBA YoungBoy loves spending time with his young son; once, he held Kayden and Kamron in his arms and loved them. He adores kissing his sons on their cheeks and carrying them on his soldiers.

NBA YoungBoy says he tries to keep his kids with him everywhere he goes. He feeds them and changes their diapers all by himself.

Born in 2016, Kamron Gaulden is not technically NBA YoungBoy’s son. He supposed that Kamron was his son and took care of him for a long time. However, after the DNA test, it was proven that Kamron was not exactly NBA YoungBoy’s biological son. And he was the one who broke the news to his fans. He mentioned that he was heartbroken when he got the news, but still, he loves little Kamron like a son and will look after him.

Despite that, NBA YoungBoy keeps supporting Starr Dejanee with money. He promised to raise Kamron as his own.

NBA YoungBoy and Niya have already parted ways, but he still maintains a good relationship with his son. He takes him to rides and has also featured him in numerous music videos.

Kamiri Gaulden was born on July 6, 2017. NBA YoungBoy father his son with his partner Starr Dejanee. He calls his third son K3. His baby mama Starr is an entrepreneur who dated YoungBoy for several years and gave birth to two of his sons.

As addressed above, NBA YoungBoy stays in touch with all mothers of his sons and plans to live with all of them someday.

Jania Bania gave birth to the fourth son of NBA YoungBoy on February 13, 2019. His baby mama is a social media influencer. She was YoungBoy’s girlfriend in 2018 and got pregnant the same year. However, they parted their ways before NBA YoungBoy’s son even saw the light of day.

To conclude, Kentrell DeSean Gaulden, aka YoungBoy Never Broke Again, loves all of his sons equally and maintains a good relationship with all of his baby mama.

All of his baby mamas have a great relationship going on, and they would love to raise their children together.

After fathering five babies and big cash, NBA Youngboy welcomed another baby girl named Kodi Capri with Drea Symone. She announced the birth of their baby girl on November 26, 2020, via Instagram.

So, Youngboy welcomed a daughter with Drea while waiting on his seventh child with Floyd Mayweather’s daughter, Yaya? Basically, NBA Youngboy impregnated two women at the same time? Did you know? If yes, LET’S INTERACT!

Floyd’s boxing legend confirmed that his baby girl,  Iyanna “Yaya” Mayweather is pregnant with NBA YoungBoy’s child. While talking to Hollywood Unlocked, he confessed that he wants the best for his daughter. When asked about Yaya’s journey into motherhood, Floyd revealed that he tries to stay away from her personal business.

Well, Floyd has now become a part of NBA YoungBoy’s growing family, and NBA is prepared for his young one with his girlfriend, Yaya, who was jailed for a stabbing incident. Well, baby #6 might bring great changes and motivations in YoungBoy’s life.

Moving on, NBA YoungBoy’s son Kamiri Gaulden’s name means Light of the world. On the other hand, Kacey Alexander Gaulden’s first name is English origin, meaning Brave, Watchful. As for his middle name Alexander, it is of Greek origin, meaning Defender of the people.

The name Kodi means helpful and has American origin.