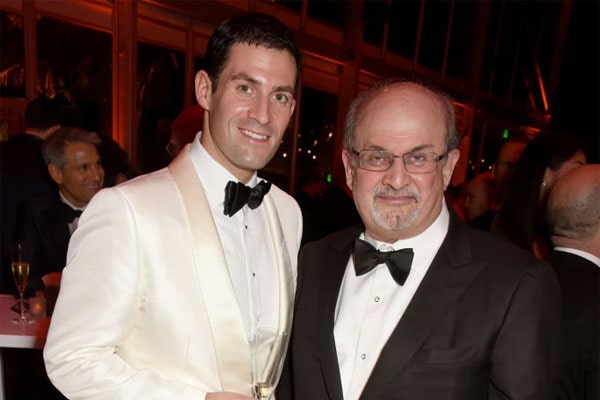 Salman Rushdie is a British Indian novelist and essayist who was married to his ex-wife, Clarissa Luard, from 1976 to 1987. They both have a son together, Zafar Rushdie, and he was born in 1980. Salman Rushdie then went on to marry three times.

Zafar also has a half-brother named Milan Rushdie. He is Salman Rushdie’s second son with ex-wife, Elizabeth West. Now, you may be wondering what Zafar Rushdie does and where he is at the moment. So, let’s get straight down to know more about him.

Salman Rushdie’s Son, Zafar Rushdie Is The Founder Of The Green Room Agency

Zafar Rushdie is the founder of the company, The Green Room Agency. The company focuses on strategic counsel for brands and agencies. Also, specializing in celebrities and influencers for Red Carpet events, PR/Advertising campaigns, product gifting, live performances, and personal appearances is what the company prioritizes.

As the founder of The Green Room Agency, Zafar Rushdie seems to have gathered a promising net worth and fortune. He probably funnels in staggering profits and benefits from this business venture. Salman Rushdie, who has a $15 million net worth, must be very proud of his son that he made something great out of his career.

Even though Salman Rushdie’s son Zafar is living a subtle life, he seems to be happy with what he has achieved. If you go through Zafar Rushdie’s Instagram Profile, it has been set in a private mode. However, Instagram’s bio clearly mentions ‘Founder of @greenroomvip.’ It seems as though Zafar Rushdie made a satisfying fortune as The Green Room Agency’s founder.

The tragic incident happened in Zafar Rushdie’s life on Nov 4, 1999. His mom, Clarrisa, died because of cancer at the age of 50. Well, five years prior to that, she had won the battle against cancer. But unfortunately, it again returned and took Clarissa away from her son, Zafar.

Clarissa’s support for Rushdie was very invaluable for him. To lose a mother was probably a tough time for Zafar. It wasn’t an easy task for him to move forward. Well, he probably misses his mom, still. Perhaps, Clarissa is looking at her son, thriving as a better person, from heaven.

According to Evening Standard, Zafar was in a long-term relationship with his then-girlfriend the classical singer, Natalie Rushdie. Then after being in a relationship for quite some time, the lovebirds married each other in June 2016. Zafar Rushdie’s wife, Natalie, is a London-based, classically trained jazz singer. Both of them are living a wonderful married life. Going through Natalie Rushdie’s Instagram, she frequently posts photos of her with husband Zafar. They seem to go on romantic dates, parties and also love hanging out with each other.

Nevertheless, the couple doesn’t seem to have any children yet and it could be that Zafar and Natalie are planning and waiting for the right time to be wonderful parents to lovely children in the coming years. We hope to see the couple as dad-mom pretty soon and wish the best for Salman Rushdie’s son in his upcoming endeavors.

The name Zafar came from Persian origin, and its meaning is ‘victory’ or ‘victor.’