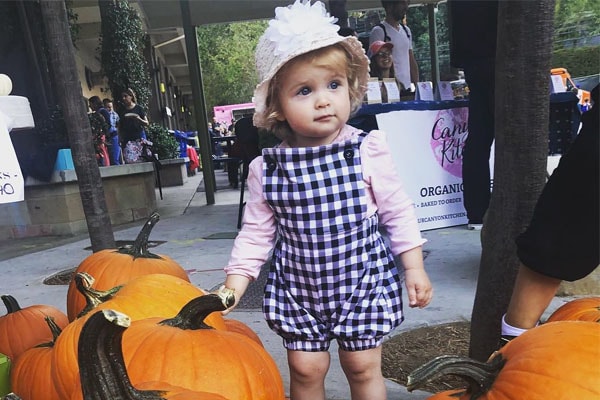 Zlata Savchenko is the youngest daughter and second child of Gleb Savchenko and wife, Elena.

The young and adorable Zlata Savchenko is the youngest daughter of famed Russian dancer Gleb Savchenko with his wife, Elena Samodanova. The lovely pair welcomed their second daughter on the first of August, 2017, in Sydney, Australia. The healthy baby girl, Zlata, weighed in at 7.9 pounds during her birth.

The 1-year-old Zlata Savchenko is the younger sister of Oliva Savchenko and the youngest member of the family. The siblings, Olivia and Zlata, share a strong bond and are inseparable.

Gleb Savchenko’s daughter, Zlata Savchenko is the second born and youngest daughter of the Savchenko family. The beautiful little princess, Zlata, get to spend most of her time with her father, Gleb. The Dancing With The Star, Gleb missed baby Zlata’s arrival as he was on a flight from Los Angeles to Sydney, where his wife, Elena gave birth. However, Gleb is compensating his missed opportunity by spending as much time as he can with his baby girl, Zlata.

The former Strictly Come Dancing star, Gleb Savchenko is successfully melting the hearts of his fans and media with photos of his newborn daughter, Zlata. The father to two wonderful daughters, Gleb, loves his girls and is not reluctant to flaunt love for his daughters on his social media.

Youngest Daughter of the Family

The beautiful Zlata Savchenko is the youngest and the most adorable member of the family. The secondborn of famous Dancing With The Stars icon, Gleb and his DWTS Russia judge wife, Elena, Zlata arrived the world on 1 August 2017. Likewise, Gleb Savchenko and his stunning wife are doing a two-step in parenthood.

The baby Zlata’s addition to the Savchenko family comes alongside elder sister Olivia Savchenko. The recently turned big sister, Olivia, is taking full responsibility of pampering her baby sister. Likewise, the adorable sibling, Olivia always wanted a little sister to take care of. Similarly, Olivia was ecstatic on her sister’s arrival and commented that baby Zlata looked like a cute little cucumber when she was born.

The name Zlata is a female baby name of South Slavic origin, which means “Golden. The beautiful name, Zlata, is shared amongst all South Slavic countries in the Balkans, such as Bosnia and Herzegovina, Bulgaria, Croatia, and Serbia.