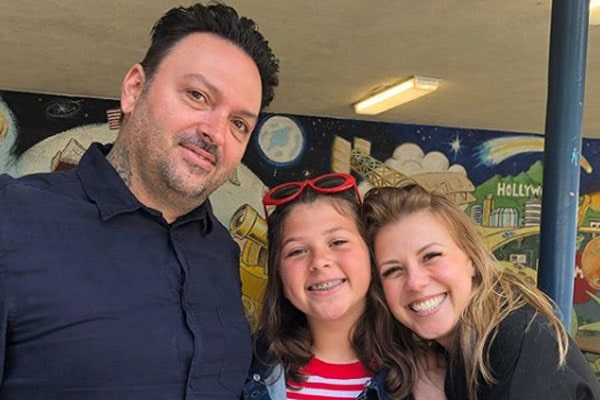 Actress Jodie Sweetin has a cute daughter named Zoie Laurel May Herpin with her second ex-husband Cody Herpin. Jodie’s daughter, Zoie, was born on April 12, 2008. Zoie’s mother, Jodie, is a well-known cast member of Fuller House, and her father, Cody s well known for his work on Unearthed. Her parents got married on 14 July 2007 and got divorced on 20 April 2010. Zoie was just two years old when her parents parted their ways.

The 11-year-old Zoie Laurel May Herpin is not the only child, and she also has a younger half-sister called Beatrix Carlin Sweetin-Coyle. Let’s discover more about Jodie Sweetin’s daughter Zoie.

Spends Quality Time With Her Mother

Zoie, being the first child of her mother, Jodie Sweetin, has a special bond with her. Both mother and daughter tend to spend a lot of quality time with each other.

We can see that both the mother and daughter duo enjoys one another’s company. Even after being an actress, Jodie takes out time out of her schedule and spend time with her daughters.

Has A Supportive Father

Furthermore, Zoie also loves playing soccer, and her father, Cody Herpin, is always there to support her. Cody is present in his daughter Zoie’s matches and takes her to watch other official games too.

Jodie Sweetin’s daughter, Zoie Laurel May Herpin, is an aspiring actress. According to the Fuller House Fandom, she did a cameo role in the Netflix series, Fuller House.

The cute Zoie seems to show passion for acting, and we can say that she is following her parent’s footsteps. We hope to see her on the silver screen in the future.

When Zoie was two years old, her little sister Beatrix Carlin Coyle was born. As they live together with their mother, Jodie, both girls grew up loving each other.

Zoie is a very caring and loving older sister. Both of Jodie Sweetin’s baby girls are very cute and supportive of each other. We wish Zoie to follow her passion and achieve her dreams.

The name Zoie is of Greek origin, meaning life.