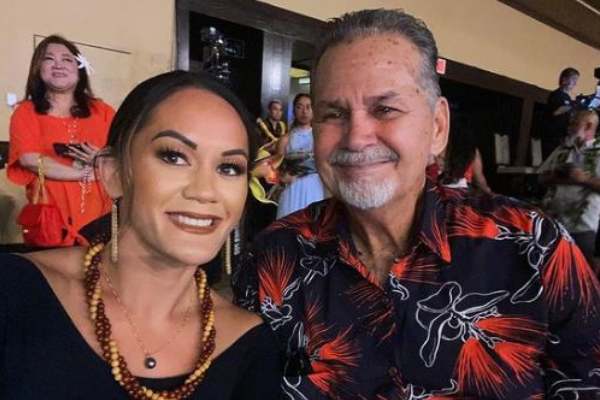 Ilima-Lei Macfarlane is a professional mixed martial artist currently competing in Bellator’s flyweight division. She was born in Honolulu, Hawaii, to Martha Mcfarlane and Walter Macfarlane. The fighter often credits her parents for where she is now. In addition, she frequently shares beautiful moments with her family.

In June 2018, a life-altering event took place in Ilima and her family’s lives, which changed everything. Mainly Ilima-Lei Macfarlane’s father was involved in this. So, keep reading to find out what happened back then and more interesting facts about her dad.

As mentioned earlier, Ilima-Lei was welcomed by Martha and Walter. The couple has been married for nearly five decades, or to be precise forty-seven years. It was love at first sight for Ilima-Lei Macfarlane’s dad when he first laid his eyes on her mother. However, in the case of Ilima-Lei’s mom, it was not the same.

Over time, Walter Macfarlane’s wife began developing feelings for him, and they began dating. Two years after their encounter, on December 24, 1975, the pair was on a trip to Vegas. That day, the lovebirds said their “I do’s.”

Ever since, the duo has been enjoying their marital bliss. Their marriage has grown stronger every year, and we hope they continue living together forever.

A Proud Father Of Six Children

As mentioned earlier, Ilima-Lei Macfarlane’s mom and dad have been married for 47 years. In all these years of togetherness, the couple brought up six kids. Walter Macfarlane’s children with his wife Martha are Ilima-Lei, Milia Macfarlane Alapa, Mahina Macfarlane Souza, Anuhea Macfarlane, Cindy Macfarlane-Flores, and Aldon Macfarlane.

The Macfarlane family is a huge family of eight, and it must have been a fun time for the children to grow up together. Likewise, Walter and Martha have instilled good principles in their kids. All of them are not adults and are busy with their careers. The couple must be proud of what their kids have achieved.

Walter Macfarlane’s daughter is the first person in the family to pursue a career in MMA. He was involved in a different career; despite that, he has always been supportive of her and other kids.

Talking about his educational background, Ilima-Lei Macfarlane’s dad graduated from Punahou School in 1962. At that time, he became the first Punahou athlete to earn nine varsity letters. Walter, who is blessed with size, athleticism, and speed, played football, basketball, and track. Because of his multiple talents, not only his teammates but his competitors respected him.

In 1962, Walter was named Athlete of the Year, and for his achievements during his school days, he was inducted into the Punahou Hall of Fame in 2008. After completing high school, he enrolled at Washington State University. He continued playing football there. In addition, he studied Mathematics and Physical Education and graduated in 1966.

A year later, Ilima-Lei’s father began working as a physical education and math teacher at his high school alma mater and worked there for 36 years until June 2003. He also coached there and became a role model for generations of future players. Since retiring, he has been enjoying the company of his wife, kids, and grandchildren. Walter also sometimes substitute teaches a PE class.

Discovered About His Biological Brother After 60 Years

As mentioned earlier, in 2018, a life-altering event occurred in the Macfarlane family’s lives. While at elementary school, Ilima-Lei Macfarlane’s dad met a guy named Alan Robinson. They played high school football together and even used to joke about marrying the same girl. Furthermore, they became life-long friends and even sent their children to their high school alma mater and always vacationed together.

But sixty years later, Walter discovered that Alan is his biological brother. Here’s how he discovered their relationship:

Growing up, Walter had no idea who his biological father was. He was born in 1943, and at that time, Hawaii was just recovering from the attack on Pearl Harbor. His mom, Genevieve Macfarlane, had planned to give him up for adoption, but instead, her parents decided “to hanai” him. It is a tradition in which a person can be adopted informally by a family, with or without papers.

Fifteen months later, Alan was born, and he was given up for adoption. Therefore, he never knew his biological parents. Robinson and Macfarlane grew up together and did almost everything together.

DNA Tests Confirmed About Their Relationship

Fast forward to the 2000s, Alan received 23andMe and Ancestry DNA test kits. He swabbed his cheek twice and sent in both samples but did not disclose his data.

In 2016, Ilima-Lein Macfarlane’s dad also submitted DNA samples to both companies at her and her sisters’ urge. A few months later, the results said that Walter’s tests strongly matched with Robi737, and the possibility of that individual being his half-brother arose. He first thought they could be related via the paternal side, but instead, he found out they had the same mother.

After some investigation, the Macfarlane family discovered that Robi737 was Alan, who used to fly 737s for Alona Airlines and was called Robby by everyone. Walter and his daughter Cindy decided to reveal this surprise to other family members at a party planned to honor the mixed martial artist. It was a Christmas miracle for both families.

Since they had known each other for a long time, it was easy for the long-lost siblings to adjust. The brothers still want to find their biological dads. They also go to lunch nearly every day and are planning for outing trips in the coming days.

Nonetheless, Ilima-Lei Macfarlane’s father seems to be doing well. He must be over the moon to find his biological brother after such a long time. Let’s hope the family often gets to enjoy the happiest moments together. We wish him sound health and blissful days ahead.