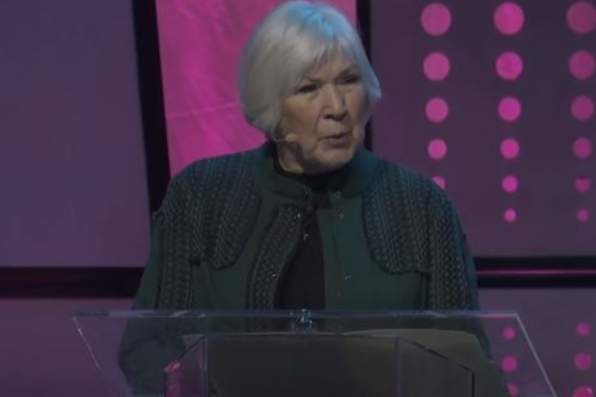 Gail Miller and Kim Wilson knew each other for a long time before tying the knot. Image Source: Social Media.

Gail Miller, born Karen Gail Miller, is a businesswoman from America. After the demise of her husband, Larry H. Miller, she was appointed as the chairwoman of the Larry H. Miller Group of Companies. Moreover, she is one of the affluent people in Utah, with a fortune worth $4 billion. She was also a part of a basketball team, the Utah Jazz, until 2020.

Gail is not only rich monetary-wise, meaning she is even wealthier with her huge family, the family that loves her no matter what. After her first husband’s death, it must have been difficult for her. But in no time, she found a companion who loves her equally.

Yes, we are talking about Kim Wilson, Gail Miller’s husband. So, let’s know more about him in the further paragraphs.

Fate Brought Them Together

As mentioned earlier, Kim Wilson’s wife was married to Larry H. Miller. But he passed away due to complications from type-2 diabetes. They had been married for forty-four years, and it must have been difficult for her. Following his death, Gail took on the responsibilities of his company and other business ventures.

Kim’s spouse carries on her late husband’s legacy, and at the same time, she also cherishes a new relationship and bond. Gail and Kim had known each other for many years. They were neighbors for more than 15 years before the couple tied the knot. They often attended the same LDS Church ward.

Gail Miller’s husband met her late spouse through his legal work, and their mutual interest in church history brought the families together. Before marrying her, Kim was married to Vickie Wilson. He met Gail several years ago through her service to his late wife, who also died due to diabetes. Gail used to arrange meals, fill the freezer with food, help care for Vickie, and clean the house.

At every turn of their life, the pair’s paths seemed to cross, and both of them were caring for their late spouses. After their late partners’ demise, Gail and Kim started to develop feelings resulting in matrimony.

As mentioned earlier, fate brought the couple, who knew each other several years before they decided to marry together. Here’s how their family friendship turned into life-long companionship.

In the summer of 2012, Gail Miller’s husband, Kim, was scheduled to attend a social event, which was related to his church history work. However, he did not want to go alone. Therefore, he called and invited Miller, thinking they would know several attendees of the event.

After that, the duo started getting to know more about one another. Soon, Kim persuaded her to marry him, and at that time, Gail revealed that no man had ever proposed to her. He stated that she was not willing to accept anything but a formal proposal to get married. It was a huge step on their part, and it definitely took some work.

In June 2012, the duo got engaged and planned on getting hitched in the summer of the same year. Nonetheless, the married pair must be living blissfully, loving and caring for one another.

Unfortunately, Gail Miller’s son, Roger Lawrence Miller, passed away on August 18, 2013, from unknown causes. Nonetheless, Kim must be close to his stepchildren. Likewise, he also shares kids with his first wife, Vickie.

Kim and Vickie were married for 39 years, and the duo welcomed four kids in all those years of being together. Kim Wilson’s children with Vickie are Jacqueline Sue Wilson Lee, Natalie Dawn, Wendy Ann Wilson Richards, and David Royal. Nonetheless, Gail must also have a loving relationship with her stepchildren.

We hope they have better days ahead.

Gail Miller’s Husband Is An Attorney

While Kim Wilson’s wife has been thriving in the business world, he has made a name for himself in a different field. Born in Logan, Utah, Kim grew up milking cows in Preston, Idaho. He attended the University of Utah and graduated in 1970 with a Bachelor of Science in Political Science. Then he studied at the S.J. Quinney College of Law at the U of Utah. He earned his J.D. in 1973.

Kim is a senior attorney at the Salt Lake City law firm Snow, Christensen & Martineau. There, he specializes in business litigation. He also served as the Chairman of the Ethics and Discipline Committee of the Utah State Bar. In addition, as the Utah Supreme Court’s appointee, he was responsible for enforcing the Rules of Professional Conduct among Utah’s licensed lawyers.

Additionally, Gail Miller’s spouse also served in several positions in the Church and is in the bishopric of his Salt Lake City Avenues ward. A lifetime student of Church History, Kim has spent over two decades in perpetuating and preserving the rich history of the Restoration. He serves as the Chairman of the Board of the Mormon Historic Sites Foundation and is also one of the founding trustees.

All in all, Gail and Kim seem to be embracing their blissful conjugal life together. Hopefully, they will continue enjoying a comfortable life. We hope Mr. Wilson has splendid days ahead.