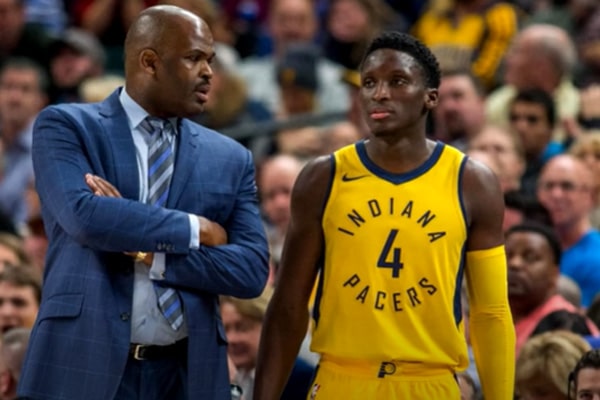 Nate McMillan's wife Michelle McMillan has been by his side for years. Image Source: Social Media.

Nicknamed The Sonic, Nate McMillan, is quite a popular name in the basketball world. The interim coach of Atlanta Hawks has been successful as both player and coach. Nate was instrumental for Seattle SuperSonics and even competed with Michael Jordan-led Chicago Bulls for an NBA title. The SuperSonics also retired his number 10 jersey in his honor.

But enough about this NBA legend; today, we are shifting our focus towards Nate McMillan’s wife, Michelle McMillan. The pair of Nate and Michelle have been together for quite some time, but much information about Michelle has not surfaced up in the media. However, we have accumulated some interesting facts about her, so don’t forget to stick to the end.

We already know Michelle as Nate McMillan’s wife, but there are not many talks about who she is on her own. Michelle herself is a basketball enthusiast. In fact, she even played the sport at Hickory High School in North Carolina. Apart from her basketball ties, Michelle also worked as an accountant but left due to undisclosed reasons.

We can already see how the two might have fallen in love. Michelle’s immense support has been one of the keys to Nate’s success, without a doubt. Michelle loved to watch Nate play so much, so; she used to forget that she was pregnant during her first pregnancy.

Moreover, Michelle has always had the ability to know if her husband had any troubles with the players or the team. She likes to call Nate a perfectionist for trying to do the very best, even if the team is not doing particularly well. Michelle has been an instrumental part of Nate’s success, which showcases her real identity.

According to the Seattle Times, Nate showed his courtesy towards his wife by gifting her a car not only once but twice. Nate gifted Michelle a black convertible Mercedes one Christmas while gifting her a black Escalade in 2003. This shows how much Nate loves his wife and cares for her happiness.

The couple has been married for more than three decades now and is showing no sign of turbulence in their relationship. Nate and Michelle seem to be the perfect couple for each other. Let’s hope we get to see these two spending quality time with each other for an eternity.

Michelle Is A Mother Of Two

While Michelle being a loving and wonderful wife, is already given, she is also an amazing mother. Nate and Michelle are parents to two wonderful children in the form of Jamelle McMillan and Brittany McMillan.

The beautiful soul has raised her children, who are currently adults and can handle their life on their own. Michelle’s son has even followed his dad’s footsteps into basketball by playing as the point guard for Arizona State Sun Devils. He is currently the assistant coach of the NBA team New Orleans Pelicans, which reemerges the career his father had. As for her daughter, Brittany remains quite secretive about her personal life and tries to avoid attention as much as possible.

Is Supportive Of Her Husband

Like many others, Michelle McMillan is very supportive of her husband’s career. She was by his side throughout his playing as well as his coaching career. Michelle was rooting for her husband when his team won games while also lending her shoulder when he faced bad days.

Similar was the case when Nate was fired by the Indiana Pacers in 2020 after a difficult season. However, the well-known coach is now the interim head coach of the Atlanta Hawks. This seems to be an opportunity for McMillan to prove himself. And without a doubt, his wife, Michelle, is by his side, cheering for him.

Needless to say, Nate McMillan’s wife is a strong and wonderful woman who has been exceptional as both mother and a wife.