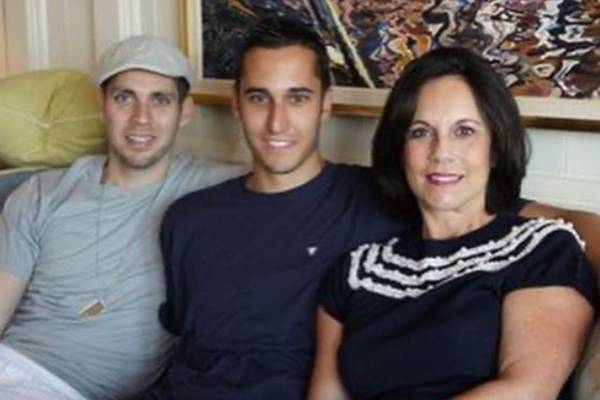 Jonnie West is recognized as a collegiate basketball player who is currently involved in the behind the scene operations of the NBA team, Golden State Warriors. He works as the Director of Basketball Operations for the Warriors and once played as a guard for his college basketball team, West Virginia Mountaineers.

Apart from his career, West also found recognition as the son of basketball legend Jerry West. The West family is popular around the world, and people are always eager to know more about them. So, today let’s learn who Jonnie West’s mother, Karen West is, and what she did in the past.

Who Is Karen West?

For many NBA fans, Karen West does not need any introduction. She first came into prominence as the wife of basketball executive and former NBA player Jerry West. Since then, Karen has been a permanent fixture in the NBA scene and has enjoyed the luxury that came from her husband’s career.

Having gotten married in 1978, Jerry and Karen are parents to two sons, Jonnie and Ryan West. And since Jonnie followed in his father’s footsteps, the West family matriarch has a new title to her name, and that is Jonnie West’s mother, Karen West. She is also step-mother to Jerry’s three children from his previous marriage.

What Did Jonnie West’s Mother Karen West Did In The Past?

Just like her family members, Karen West has also had an illustrious career path. She was reportedly a cheerleader and also taught young ones at one point. According to her Facebook profile, Jonnie West’s mom, Karen West, used to teach at the Los Angeles Unified School District. She spent quite some time shaping the mind of young students in LA.

Moreover, West also worked at the California State Controller’s Office, which shows the variety of job positions that Karen has held over the years. She was a working mother but managed to raise her two boys and also support her husband, Jerry West, along the way. Her sons are both involved in NBA as Ryan West joined the Detroit Pistons as a scout in 2020, while Jonnie is the Director of Basketball Operations for the Golden State Warriors.

Karen West Is Enjoying Her Retirement

After enjoying a successful professional career, Jonnie West’s mother, Karen West, seems to be enjoying her retired life. While her husband, Jerry West, is still working as the executive board member for the Los Angeles Clippers, Karen has ended her professional career. She is living her retired life to the fullest, and we can see her travel diaries on her social media pages. Karen and Jerry are members of Greenbrier Sports Club Members and have talked about their favorite vacation spots with the club.

In addition to traveling, Karen is also enjoying her time as a grandmother. Her son, Jonnie West, and his wife, Michelle Wie, welcomed a baby girl on June 19, 2020, and West has undoubtedly showered the little one with lots of love. Karen also shares a close bond with her daughter-in-law, Michelle, and has become a great support system for the new mother.

Looking at the life Jonnie West’s mom, Karen West, has lived, it is clear that she has experienced many things to date. She has raised two amazing sons who are doing well for themselves and also supported her husband through every personal and professional challenge. And since becoming a grandmother, she is happily spoiling the youngest West family member.