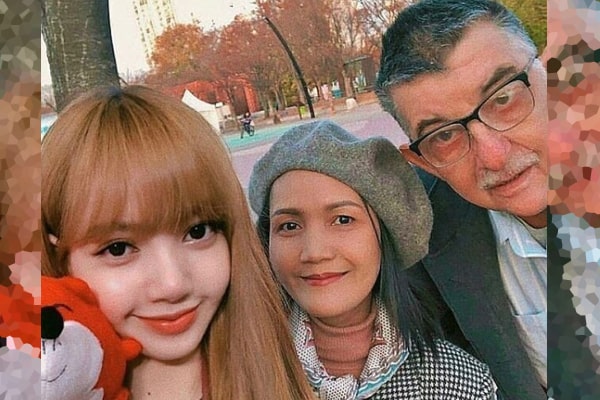 Lalisa Manoban, famous by the mononym, Lisa needs no introduction as she is dominating the pop world with her group, Blackpink. The Thai rapper, singer, and dancer Lisa had always been a tremendous performer and ranked first in the YG Entertainment Competition; she was only 13.

Besides having a remarkable career, Lalisa Manoban is very private about her family and personal lives. They have appeared in the Blackpink House a few times, and her fans have grown fond of them. Thus, here is everything about Lalisa Manoban’s parents and their whereabouts for fans. Furthermore, we also tried to find about her biological father, so stick until the end.

BLACKPINK’s Lisa hails from Thailand. Born to her mother, Chitthip Brüschweile, and her first husband, Lisa’s mother likes to keep things to herself. However, we know that she and her first partner parted ways shortly after welcoming their daughter, Lisa, born Pranpriya Manoban, in 1997.

The sweet-looking lady, Chitthip, is not that active on her social media. Moreover, her Facebook has been lying dormant since August 2019. However, we have seen Lisa Manoban’s mother, Chitthip being a cheerful lady. She is often quiet and generous and loves her daughter very much. Moreover, it was Lisa’s mother who inspired her to pursue music in the first place.

Moreover, according to Blackpink Fandom, it states that Lisa’s mother, Chitthip, is close to GOT7’s Bam Bam‘s mother. Furthermore, it also notes that she was seen outside BTS’s concert in Bangkok, Thailand. Chitthip manages to appear on almost every show of her daughter as well.

Now, let’s look into the lives of Lisa Manoban’s stepfather and his career.

It is no secret amongst Lisa’s fans that Marco P. Brüschweile is a swiss chef. He and Lisa’s mother tied knots when they were very young, and hence, he settled down in Thai to become a family. Interestingly, the Brüschweile pair did not welcome their own child after their marriage.

Aforementioned, Blackpink’s Lalisa Manoban’s step-father, Marco P. Brüschweile, is a renowned swiss chef in his 60s. He has achieved several breakthroughs in his career as a chef and runs many successful restaurants worldwide, like the Sun City Casino in Rustenberg, South Africa.

Similarly, the graduate with a Swiss Master’s degree, Marco, settled in Thailand and swiftly became accustomed to the Thai culture and became one of the leading Thai cuisine specialists.

Moreover, Lisa’s father, Marco, revealed that his only daughter likes her mother’s cooking, who happens to be the most passable cook herself. Like Chitthip, Marco’s Facebook also remains dormant since 2018. Likewise, Lisa also talks about her father during interviews. Once, she said that her father’s career might have influenced her into liking big kitchens.

Lisa mentioned about her dad, so precious omg we don’t deserve her 😩💕 #BLACKPINK_HOUSE pic.twitter.com/MuEZR67cGn

Lalisa Manoban’s parents, Chitthip and Marco Brüschweile, are the frequent faces in BLACKPINK HOUSE than other members’ parents.

Lisa’s Parents Surprised Her In 2018

As stated earlier, amongst the Blackpink’s members, Lisa’s parents are the frequent faces at the Blackpink’s house. The Brüschweile couple first surprised their daughter and other members in 2018 with mouth-watering Thai cuisine.

Jiso, Jennie, and Rosé took no time to warm up with Lalisa Manoban’s parents and enjoyed the meal with great enthusiasm. Furthermore, the subtle love between the father-daughter duo was evident.

Lisa’s parents were supportive of their daughters since she was 13 and always helped her row her boat in the river of success. Hence, the Blackpink’s rapper never ceases to thank her parents.