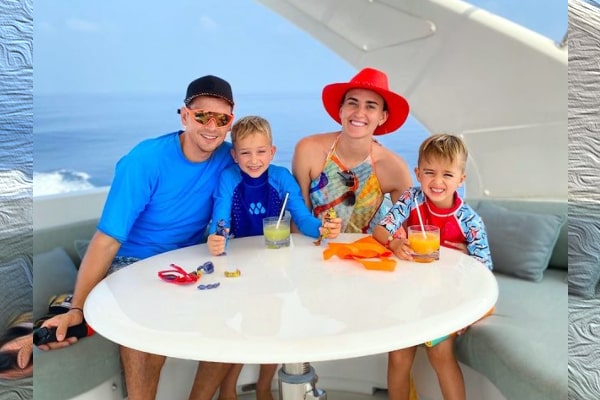 Whether it be a regular vlog, childish challenges, serious talents, or mere prank videos, YouTube has become a massive platform for people. Among them is Vlad and Niki who became an internet icon at a very young age.

Vlad and Nikita are fortunate to have a young and supportive family who purely loves one another and their family.

Unfortunately, not much is revealed about the Russian-American couple, and their relationship chronicles. Despite being notoriously private, both Sergey and Victoria are evidently in love with one another.

Furthermore, the Vashketov couple often share pictures of them enjoying one another’s company. Likewise, the father of three, Sergey Vashketov, appreciates his wife and her hard work to keep the family intact and vice versa.

Furthermore, Victoria and Sergey Vashketov’s first child, Vladislav Vashketov, was born on February 26, 2013. Likewise, their second kid, Nikita, on June 4, 2015. And, they finally welcomed their youngest child, Christian, sometime in 2019.

The Vashketov couple has become a powerful family, and their presence on YouTube is very notable and influential. Furthermore, their first two kids, Vlad and Nikita, became kid influencers, and they could give up their jobs to pursue as full-time YouTubers.

Both Vlad and Nikita’s Parents Are Full-Time YouTubers

Aforementioned, Vlad and Niki’s parents helped them grow their YouTube massively. What started as a mere hobby of the kids turned into a life-changing career for the Vashketov family.

Furthermore, Vlad and Nikita’s mother, Victoria Vashketova, seems to keep her information under the radar pretty carefully without giving away much about her personal lives. Similar is the story of Sergey Vashketov.

According to People, Victoria once revealed that her babies were inspired by other videos and asked if they can start making their own. Hence, Sergey and Victoria began shooting fun videos on the weekends and edited them in Sergey’s spare time. Slowly, they began posting and started gaining audiences rapidly.

Talking about the father of the family, Sergey Vashketov likes to introduce himself as a YouTube producer. Unfortunately, we do not know much about either him or his wife, Victoria’s post-YouTube career, but we know that the pair has fully embraced their YouTube career.

But, how much do they earn from their YouTube ventures?

Vlad and Niki’s Parents’ Net Worth

As stated earlier, Vlad and Nikita’s parents are making their kids’ dream to become a YouTuber come true. At age seven and eight, and six, Vlad and Niki became influencing figures amongst pre-schoolers.

If you are a fan of Vlad and Niki, you’d already know their parents run 21 channels in 18 different languages. If you know about how YouTube works, you might already know money rains in the Vashketov family from YouTube alone.

Vlad and Niki have amassed several million views and subscribers worldwide, and each channel earns a handsome amount alongside billions of views. Interestingly, the pair started their channel in April 2018, and its growth within two years is truly unique.

Therefore, here, we have tried to show a quick table about how their YouTube aids Victoria and Sergey’s net worth. According to Social Blade, Vlad and Nikki’s estimated earnings from their diverse channels are listed below.

Likewise, they also earn from their merch which is mostly sold out within hours of its’ launch. Hence, merchandise and brand endorsements also impact the Vashketov family’s net worth massively.

Well, Vlad and Nikita’s parents, Victoria and Sergey, live their dreams while giving life to their kids’ imagination. Interestingly, they cunningly maintained their privacy, having appeared on Instagram only in 2015. But we do hope to see more of them in the coming days.