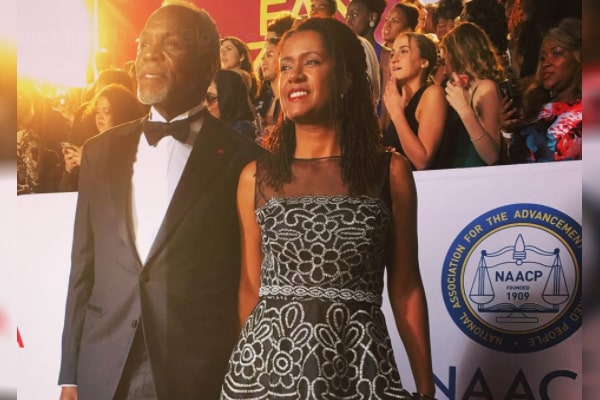 Daniel Lebern Glover aka Danny Glover is an American actor known for his role in the Lethal Weapon series. Besides being a critically acclaimed actor, he is also a political activist and an active supporter of various political causes.

The 74-year-old actor married twice throughout his lifetime. Glover’s second marriage with a partner, Eliane Cavalleiro, is a success, and they have been married for more than a decade. Well, it looks like Danny is not the only person of interest in this relationship. Turns out, Glover’s wife, Eliane, is quite a big deal as well.

Hence, let’s find out who Danny Glover’s wife, Eliane Cavalleiro, is and what the pair shares in common.

The actor and director, Daniel Glover’s partner, Eliane, is a scholarly lady. She acquired her Master’s degree in 1988 and her Doctoral degree in 2003 through the School of Education of the University of Sao Paulo.

Eliane Cavalleiro is a professor at Stanford University and teaches Racial and Gender Inequalities in Latin America. Furthermore, she has several publications, including Silence of the Household to the School: racism discrimination in children’s education, prejudice, etc. Likewise, she also worked at Universidade de Brasília.

Her other works include Racism and anti-racism in education: rethinking our school, Selo Negro/Summus, Endless Night’s Paths: socialization and racial belonging in successive generations of black families, and many more.

Besides her job at Stanford, she also has served in several NGOs and worked for her fellow people.

Aforementioned, Glover’s wife is not just a teacher but also very philanthropic. She shares the humble trait with her handsome beau, Glover.

Eliane served as the executive coordinator of the NGO Geledes from 2000 until 2004. Likewise, she was also associated with UNESCO as a consultant-Regional Education Workshop for Latin America and the Caribbean/OREALC.

Besides, Cavalleiro also worked as the General Coordinator of Diversity and Educational Inclusion, in the Secretariat of Continuing Education. Furthermore, the brilliant woman is the former President of the Brazilian Association of Black Researchers until 2010 since 2008.

Eliane Cavalleiro has tried to make remarkable changes and contributed to several changes and betterment for Black people from a young age. Let’s hope the quest to change the thinking and prevail equality ends soon on a positive note.

Well, Glover and Cavalleiro prove that age is just a number when you have a real connection. Aforementioned, Eliane is a philanthropic person and has worked with several NGOs during her time in Brazil.

Alike is Cavalleiro’s partner. Hence, their like-mindedness brought them together at the World Social Forum in Porto Alegre, Brazil, in 2003. The pair had instant chemistry and, later on, fell in love despite having two whole decades of the age gap.

Well, as stated above, who would separate two lovers if the real connection is present. Although the couple had their share of a long-distance relationship, Glover was always sure about wanting to marry and settle with Eliane forever. And, so he did.

While maintaining their privacy, the couple is still together and still supporting one another. Both the partners are very clear about their agenda, and clarity seems to be just another ingredient of a healthy relationship.

Although the pair have been together for quite some time, news of their offspring is yet to surface.

Danny is a very private person and prefers to live a private life, which is probably why we did not hear of their big day nor their children. Although they are very private about their relationship and possibly haven’t conceived just yet, they both share children from their previous relationships.

Danny Glover’s wife is a mother of two adorable sons, named Juan JC and Ramon Cavalleiro. They seem to share a good sibling bond as well as artistic thoughts. Cavalleiro’s son Juan is a photographer while Ramon is a visual artist. They both are an adult and are pursuing their respective career.

Before Eliane Cavalleiro, Danny was married to Asake Bomani in 1975. Their conjugal resulted in a baby girl named Mandisa Glover. Glover’s daughter was born in 1975.

Danny and Asake divorced in 2000, and a few years later, Eliane came into the picture, and the rest is history.