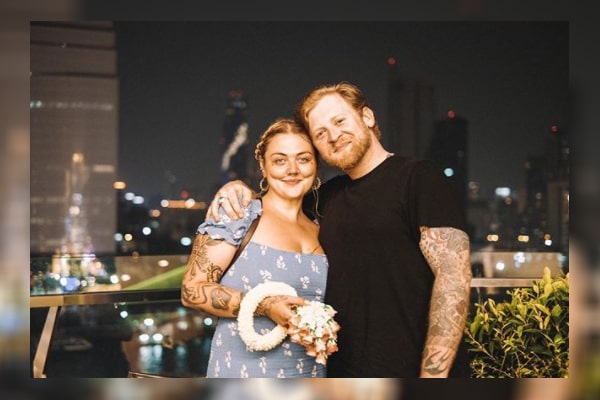 Besides being busy with works, Elle has managed to keep up with her dating life. Currently, she is dating a tattoo artist, Dan Tooker. The couple has been dating for a couple of months and even battling this pandemic together. Thus, let’s look into the life of Elle King’s boyfriend, Dan Tooker, in the following article.

Elle King’s Boyfriend Is A Tattooist

Singer/songwriter Elle King’s boyfriend, Dan Tooker, is a tattoo artist. Excelling in the old school/bold classic tattooing, Dan is a tattoo artist with decades-long experience. Furthermore, he uploads his works on social media like Instagram, with a massive following of 17.5k.

Dan Tooker’s site, Riverside Tattoo Club, does not have much but many of his products. According to Tooker’s Facebook page, Tooker is continuing to work with limited sitings and sell a bunch of cards.

Tooker’s works look ecstatic and colorful. Although he describes his forte in the delicate lining and black & grey, most of his works are old school. Moreover, some of King’s partner’s tattoos outshines the other, especially the bigger pieces.

As of now, the pandemic must have ravaged the schedule. Despite that, Tooker has scheduled a few appointments till September. Let’s hope the business proliferates even on difficult days.

Dan Tooker, Elle King’s boyfriend, is aggressively private. His fame hiked as he began dating singer and songwriter, Elle, but he has managed to keep his details confidential.

Although active on Instagram, Dan shares nothing but his works and appreciation posts for his girlfriend. Therefore, Tooker’s childhood, his birthdates are mostly secluded from the public’s interest.

Furthermore, King’s beloved seems to be a nature-friendly guy with a massive creative mind. The couple shares most of their values regarding sharing their lives rather than publicizing every moment of their lives.

Love is a strong feeling that drives a person to be at their best. A similar sense occurred to tattooist Dan Tooker as he met the love of his life, Elle King. The couple hasn’t been dating for years, but months of togetherness has proven blissful.

According to Tooker’s post back in June, he reminisces a phone call and thanks coincidences, which led them to meet. The man of big words appreciated their nine months of sharing love and was ecstatic for millions more.

Likewise, on several other posts, King’s boyfriend appreciated her goofiness and expressed his love. Well, besides Tooker’s tattoos, the only face we can see as we scroll his Instagram or Facebook is Elle King’s. Thus, the lovebirds must be enjoying their time together.

Let’s hope to hear more of the pair in the coming days.

Battling The Novel Covid-19 Together

Well, the ongoing pandemic has made many people live together. Some strain apart, while others grow stronger. Elle King and Dan Tooker fall in the latter one.

According to MSN, Elle marked the lockdown period as the most time she has ever spent with a partner. She revealed that the first half of quarantine was pretty lonely, then Dan joined her. The pandemic has brought them together and made them stronger.

The Boston based tattoo artist loves to spend time together, but as of now, they have gone back to the scheduled timing.

Before meeting Dan, the 31-year-old singer was engaged to her former partner, identified as Jim, on her 30th birthday. Tooker’s partner proudly showed off her ring on her Instagram stories back in 2019.

Elle kept her previous romance under wraps. Unfortunately, her relationship did not last long as the couple parted ways shortly after.

Furthermore, King was married to Scottish musician Andrew Ferguson in January 2016. Interestingly, Elle and Andrew got engaged twelve days later on a sailing trip and married on Valentine’s Day, 2016. The pair divorced shortly after on May 15, 2017. Although the former couple reconciled briefly in 2017, their relationship was beyond repair.

The Ex’s and Oh singer, Elle King, had several relationships and went through some severe violence, which led to substance abuse and PTSD. However, she overcame her past and is living blissfully with her new beau, Dan Tooker.

Despite having very little about King’s partner, we sure can assume that he is a keeper. Since the lovely pair has similar tastes, let’s hope their love grows with time.