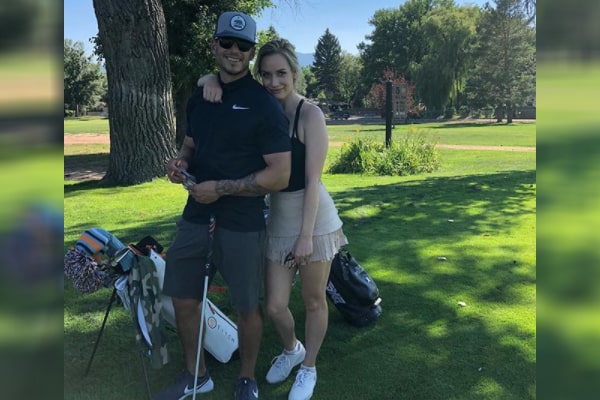 Entertaining 2.8 million followers with her beautiful pictures and trick-shots videos, Paige thrives in her career as a social media personality. Besides that, Spiranac enjoys a blissful relationship with her fitness trainer partner, Steven Tinoco,  We know one or two things about Paige, but her spouse prefers shedding light on her. Therefore, here are five facts about Paige Spiranac’s husband, Steven Tinoco.

The golf sensation, Paige Spiranac’s husband, Steven Tinoco, is a fitness enthusiast and a certified trainer. He has been working in the fitness world since 2017 for Six Zero Sox Fit. According to Tinoco’s LinkedIn, he graduated from California State University with a degree in the Field of Study Criminal Justice and Corrections.

Years of training alongside the best trainers as an elite athlete have given Steven a unique fitness perspective. He further provides both training pieces in-person and online coaching that is accessible from any nook in the world.

Before working as a certified trainer, Spiranac’s beau worked as an assistant at Gold’s Gym for five years from 2010 to 2016. Hence, he came a long way before running his classes. Additionally, Steve’s professional career as a baseball player also aided his career transition as a fitness trainer.

Aforementioned, Paige Spiranac’s husband is a certified trainer and a baseball player. The Tesoro High School graduate is a former minor league baseball player. Moreover, Steve was selected in the 34th round by the Tampa Bay Rays of the 2010 MLB Draft.

Furthermore, Steven played for Joplin Blasters for a year and Lincoln Pro Baseball-Saltdogs for two months in 2015. Likewise, he also played for Sioux Falls Canaries for a year from 2014/15.

Besides being a former professional baseball player, Steven Tinoco also worked as a substitute child care leader at Saddleback Unified School District for four years. Similarly, Paige Spiranac’s mate was employed as a bartender at Rose Canyon Cantina for a year back in 2014.

Well, Steven has had a wide area of work experience before acknowledging his passion for fitness. And hence, today, he is serving as a result-oriented trainer.

A Little Sneak-Peak On Spiranac’s Husband

Well, Paige Spiranac’s life revolved around television and sports, as she belongs to a family with a sporty background. However, her spouse, Steven, comes from an average, non-flashy family that includes his mother and siblings.

Furthermore, Steven is very active on Instagram and proudly shares moments with his family and the love of his life. While going through Tinoco’s Instagram, we can see that he has a younger brother and a sister. He loves them dearly and has a great bond with one another. Growing up with his siblings seems to hold a special place in his heart.

Likewise, Steven Tinoco is a mama’s boy. He loves his mother and mentions her every once in a while. Similarly, he never forgets to wish his mom or sister or brother on their birthdays and invite them to every event he is a part of. Hence, Paige Spiranac’s husband is a family man and will raise a great family with her.

Met During The Starting Of Her Career

Love comes around in an unexpected turn of life, and such was the case with the golf’s sex symbol, Paige, and her spouse, Steven. Like every modern love story of this modern era, they met via the screen, loved one another’s vibe, and entered the relationship thing.

According to the New York Times, Tinoco’s wife had revealed that the pair met during the starting of her career. Furthermore, he seems pretty supportive of Paige’s aspirations. Moreover, the lovebirds rose to fame together, and interestingly, he even encourages her to show a little more cleavage. Talk about vibing together.

Got Engaged On A Trip To Dubai

While Paige and Steven were glowing together, Steven proposed his lady on a trip to Dubai in December 2016. They announced their engagement via social media with 2.8 million and 5k followers combined.

However, the pair have kept their relationship details to themselves and refrained from showing their glory days with the world. Interestingly, Steven shares abundant pictures of them together while Paige has kept it professional as she seems to be earning from sponsorships.

Although the pair’s life seems glamourous via Instagram, Paige clarified that her private life with her partner is pretty serene. Not everything we see on social media is true, eh?

Paige is a beautiful human being with a godly body and soulful personality, and so is her soulmate, Steven Tinoco. Together, they make a gorgeous couple of beautiful faces, bodies, and characters.

Aforementioned, Paige and Steven got engaged in 2016 in Dubai. But the pair took time before walking down the aisle. Hence, they got married in 2018 secretly. Both Paige and Steven haven’t shared a clip of their wedding day but wished them on their first wedding anniversary.

Steven Tinoco’s wife, Paige, was pretty disappointed because the one thing she wanted to keep to herself got exposed because of a foolish ex-boyfriend. Therefore, she must have willingly chosen to keep her wedding day to herself. Fair enough!

Although it has been two years since their marriage and several years of dating, the couple is yet to welcome their baby. Except, they adopted a fur baby in 2017.