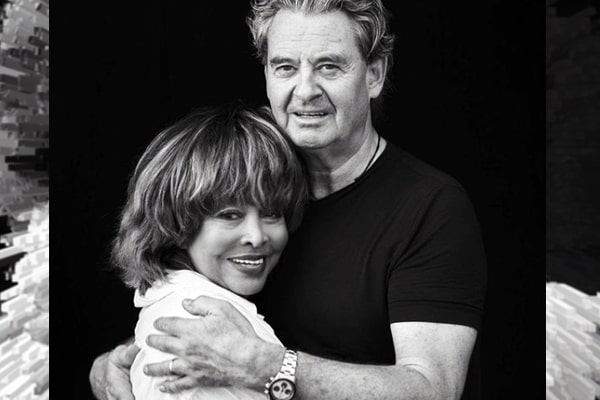 Despite having a robust career as a solo performer, Tina did have difficulties finding the love of her life. She experienced horrendous domestic abuse at the hands of her former partner, Ike Turner. However, she is in a very healthy and happy relationship with her second husband, Erwin Bach.

Tina Turner is one of the most excellent musicians in history. But no less deserving is her husband, Erwin Bach. The German music executive has worked on several projects that have gained notable praises and awards.

Erwin previously worked as the managing director at EMI Germany and EMI Recorded Music Switzerland. Throughout his career, Bach has also served as the record executive and producer. Likewise, he has worked with legendary artists like Paul McCartney, Lenny Kravitz, Radiohead, Queen, Pink Floyd, etc.

Similarly, Turner’s spouse also executive produced her documentary, ‘Tina’ and produced ‘TINA – The Tina Turner Musical.’ The show premiered at London’s Aldwych Theatre in 2018 and opened on Broadway in November 2019.

Throughout years of hard work and dedication, Erwin Bach’s net worth has escalated to $50 million. He not just earned money but also reputation and fame. Above all are the love and life-long relationship with a partner, Tina Turner.

As stated earlier, Tina Turner won the world with her music, but love, she wasn’t initially aligned with it. However, things changed after she divorced from her now ex-partner, Ike Turner.

Tina and Erwin Bach’s first meeting is like the story right out of the rom-com. Then 30-year-old music executive with EMI, Bach, was assigned to pick up then 47-year-old megastar, Turner, from the airport.

While talking to Oprah, Bach’s lover of 30 years, revealed that it was an instant connection for her. Moreover, Turner described the moment as ‘love at first sight’ in Ophrah’s Next Chapter. Likewise, in her documentary, she further explained that her husband had the prettiest face and could not miss it.

Turner also reckoned that her heart went ‘bu-bum.’ Later in her book Happiness Becomes You: A Guide to Changing Your Life For Good, she elaborated their first meet.

The Bach couple first met at Germany’s airport. Turner further remembers that she noticed her partner regardless of her hectic schedule. She also added that despite her mind full of thoughts, she felt an emotional connection. Also, Turner reminded herself not to think of romance, but she later became determined to know more about him.

On the other hand, love was not an instant for Erwin, Despite having one of the most celebrated celebrities in the back of a car, he was not nervous, and they got along well. Can ya’ll picture this?

Erwin Is 16 Years Younger Than His Partner

When two people are in love with one another, age merely becomes a number. The couple of thirty years have a whopping sixteen years difference. However, it never mattered for the pair.

If we forgot to mention it before, Erwin visited Turner shortly after their first meet in Nashville. There, Tina made a cheeky proposition asking him to visit her in LA. Per the documentary, Erwin did not believe what he was hearing but visited her in Los Angeles nevertheless.

Hence, their relationship began in the Music City, and Erwin’s partner recalls feeling comfortable. She described her lover as “so different, laid back, and unpretentious.”

Likewise, Bach refers to their relationship, his feeling for his partner as an electrical charge. They celebrated their time together, and on the occasion of Turner’s 50th birthday, he even managed to propose to her; to which Tina recalls not having an answer.

Aforementioned, Tina Turner’s husband, Erwin Bach, proposed to her on her 50th birthday, but she did not answer. Instead, she said, “Marriage says ownership” and that she did not want any of that anymore.

Hence, after twenty-seven years of dating and thirty-year after they met, Erwin Bach and Tina Turner were wedded on July 4, 2013, on Switzerland’s Lake Zurich banks.

According to Deccan Herald, the ceremony was held on Sunday at the 5,500 sq. m mansion in Kusnacht, where the 73 y/o at the time acquired a Swiss passport. The pair had been living in the villa for the past 17 years before their marriage in 2013.

Furthermore, over a hundred guests list included Eros Ramazzotti, David Bowie, Giorgio Armani, and Oprah Winfrey. Interestingly, all of her guests were requested to dress in pure white for the ceremony while she stood out in her custom-made green Armani wedding dress.

Bach’s Wife Had Suffered A Stroke, Three Weeks After Their Wedding

After a spectacular ceremony, Erwin Bach’s wife, Tina Turner, had a stroke that forced her into bed rest. While talking to Oprah, she revealed that she returned from her honeymoon, she was determined to find out what was causing pain in her chest.

However, two days later, Tina went to the hospital; she had a stroke which was the beginning of the sickness. In her book, My Love Story, she mentioned that the stroke had ‘delivered a powerful blow’ to her body.

While talking to Winfrey, she also revealed that countless MRIs and X-Rays couldn’t diagnose her, and all she had to do was take magnesium. Her chest pain was worse during her wedding day, and her dress was not helpful at all.

The stroke she suffered months after her marriage had her bedridden, and she was diagnosed with more health problems. She soon discovered she couldn’t walk independently and had to ask for help from her beloved partner.

Gave His Kidney To His Wife

Bad days and disease never discriminate against people, even when you are a mega-star like Tina Turner.

Erwin Bach and Tina Turner’s honeymoon was short-lived because she suffered a stroke, as mentioned earlier. The couple only got over their first stroke but was hit by yet another blow a few years later.

Sadly, Bach’s beau was diagnosed with intestinal cancer, which broke her. However, he stood up with her, and as Tina described, her husband ‘radiated confidence, optimism and joie de vivre.’

According to People, Bach’s wife tried homeopathic remedies, which only worsened her case, and before long, she faced a total kidney failure. Additionally, in her book, My Love Story, she revealed she’d considered assisted suicide as her survival chances were slim without a kidney transplant.

That’s where Tina Turner’s beau stepped in and said he wanted to give her one of his kidneys. Although she felt the enormity of his offer, she was happy and relieved that they’d come through this alive.

The amount of tragedy and problems the couple has come through is massive and countless. But together, a pair can climb Everest of problems without once hurting one another, and the Bach couple is the living proof of it.

Furthermore, Bach admitted that the documentary was a part of Turner’s goodbye. He further added that she’d be visiting America to say goodbye to her American friends and then wrap things up.

Moreover, Bach previously revealed that it was tough for him to listen to his wife talk about her abusive past. He also admitted that Tina has been in the public’s eye for a very long time, and the question regarding her past is recurring, and so did her trauma.

Hence, Tina Turner’s husband, Erwin Bach, must be very relieved now that his partner decided to rest. She still actively share their pictures on Instagram while her husband shied away from social media.