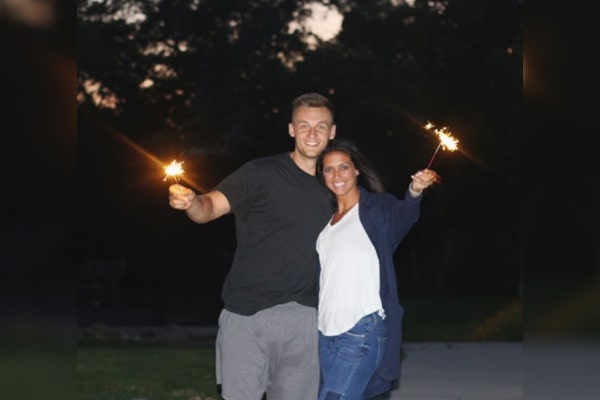 Kyle Collinsworth is a professional basketball player for the Salt Lake City Stars of the NBA League. He broke the NCAA single-season record for triple-doubles with six during the 2014-15 season. Furthermore, Kyle recorded his twelfth career triple-double in March 2016, extending the NCAA record while playing for Brigham Young University.

Starting professional basketball career Texas Legends of the NBA Development League as an affiliate player of the Mavericks, Kyle is growing significantly. Moreover, besides having a robust career as a pro-basketball player, he is also a caring husband to Shea Martinez-Collinsworth. The Collinsworth couple has been married since 2015, and their chemistry is irresistible.

Kyle Collinsworth’s Wife Is A Runner

NBA League player, Kyle Collinsworth’s wife, Shea Martinez-Collinsworth, is BYU track and field runner and has impressive records throughout her career. She has been running as a kid claiming All-American honors during the indoor season by finishing in seventh place.

BYU’s top 800m runner, Martinez, was a three-time individual Utah 5A state 1600 and 800m champion and state record holder before joining BYU. Furthermore, she was the 2010 Utah Gatorade Cross Country Runner of the Year and hit several milestones as a runner.

The long-legged woman with big dreams, Shea fell in love with running since she was a child and grew up to choose BYU after realizing other schools didn’t have the atmosphere she sought. By 2015, she earned the name ‘anaerobic monster’ as a sophomore from her coach, Patrick Shane.

The former Davis High School smashed her record by three seconds, finishing first at a meet in Ames, Iowa, in 2017. She further finished fourth during the NCAA Division I Track and Field Championships in 2017. She continued to run and set records of her own, all while impressing coaches and audiences.

As of now, Kyle Collinsworth’s wife, Shea, guides/teaches to build a running base based on her decade-long training alongside best coaches. The shy person, Shea, also serves as a pro-athlete for Nike and is interested in several other games.

Shea Martinez Is The Second-Youngest Of 5 Kids

Born and raised in Layton, Utah, Kyle Collinsworth’s spouse, Shea, is the second youngest of five kids. She was born to daycare teacher, Evelyn Martinez, and Anthony Martinez.

Shea and her siblings seem to share admiringly strong bonds. Furthermore, she occasionally shares pictures with her parents and siblings on her social media handles. The occasional birthday wishes to her brother, Montana Baja Martinez, and sister, Tessa Martinez Carmack shows the loving bond between the siblings.

Although Rory Martinez, Nicole Martinez, and other siblings rarely appear on her social media, she cherishes her families’ well being. Additionally, Shea Martinez-Collinsworth’s entire family greet her on track during her game days and show their support. Similarly, Shea’s mother, Evelyn, posts about her children, grandkids, and seems to be waiting for Shea’s children eagerly.

The Martinez family is ginormous and filled with love, raising children with great future and ambitions like Shea Martinez’s. Let’s hope the family-love remains unusually strong as it is today.

Well, how to make a man chase you when you are one of the fastest runners in the BYU? Ask Kyle Collinsworth’s wife, Shea, as she ran off, ranking Kyle’s workout outfit an embarrassing three and ran off.

According to Deseret, the couple first met in an athletic department weight room in 2014 and began dating soon after May 2014. While talking to Herald Extra, Shea revealed that things clicked between them and never really hung out or anything. Talk about a fantastic runner and junior guard for BYU’s basketball team at the time.

Interestingly, the lovebirds met a couple of months after Collinsworth injured his knee in the WCC tournament. Therefore, she joked about him not being able to run away, and now, they are a blissfully married couple. But, before that, there was a vast wall to cross over, i.e., Shea’s parents.

Shea Martinez-Collinsworth’s Parents Were Skeptical About Their Relationship

Parents are always wary about their kid’s future, especially about the partners they choose to bring home to. Hence, Shea’s parents finally confronted their nightmare when she talked about Kyle, the famous BYU basketball player.

Although Evelyn Martinez laughs about the incident today, she freaked out that she and her husband, Anthony drove to meet Shea’s coach, Patrick Shane. However, they were concerned if Kyle’s dream would interfere with Shea’s and vice versa.

But Patrick asked the Martinez couple to give Kyle a chance, and hence the couple went on a dinner with their daughter and Kyle in Provo. Sadly, Shea’s mother was skeptical about the very end as she envisioned her daughter’s shattering dreams.

However, the couple continued to date, and speedily married in 2015 with their parents’ consent. Plus, Shea Martinez-Collinsworth’s husband, Kyle, is a reoccurring face in Evelyn’s Instagram.

Married After A Year Of Dating

Kyle Collinsworth and Shea Martinez did not date for long as they soon got married in June 2015. The posh wedding was extraordinarily beautiful and serene from the world surrounded by friends and families.

Although they did not celebrate their youth as lovers, both Kyle and Shea are enjoying being married. Moreover, they do not shy away from sharing their love on Instagram, plus kudos to the pandemic, they spent a lot more time with one another.

Furthermore, once a skeptical mother-in-law, Evelyn, believes that Kyle is one of the most disciplined people, the couple is thriving to be their best. Shea only got stronger after their marriage, and her mother praises her husband for her success.

Moreover, both Kyle and Shea’s Instagram is filled with their workout videos, travel pictures, and them goofing around. Guess fewer dates before marriage indeed was a blessing for this couple.

NBA League player, Kyle truly appreciate his wife and thanks to the universe for conspiring their chemistry. Even five years after their marriage, the Collinsworth couple is only growing more robust than ever. Let’s hope the love and chemistry remain for eternity.

Two years into marriage, the couple were drifted apart by Kyle’s game and her race. In 2017, Shea’s husband played for NBA D-League basketball in Dallas while she was juggling school, track, and marriage from a distance,

Kyle’s partner was managing everything gracefully at a young age as she prepared for an impressive race later that year. Furthermore, she was determined, and everyone in the room felt her energy.

Though four states apart, they managed to keep up with their romance and build a strong career. Hence, driven by love, passion, and support, no one can stop the Collinsworth couple from conquering the world.

As an athlete, it is necessary to keep their body fit, and hence they go through rigorous training. Alike is the case with Mrs. Collinsworth as she is a health-conscious person like her husband. We might as well say, she got inspired by her partner’s habit and became well-versed at it.

Furthermore, according to Deseret, Kyle’s sweetheart joined him after she saw him eating a healthy diet. He further clarified that he was probably 6-7 months into eating healthy when he met Shea.

As of now, eating clean is a massive part of their relationship, and loves making dinner together. Furthermore, Martinez-Collinsworth’s husband also revealed that preparing food, dining, and cleaning up together is a time set aside for them. Now, that seems like a couple goals, doesn’t it?

Well, Kyle and Shea are doing their best as a couple and as professionals. Let’s hope we get to see the beautiful young couple turn grey together.