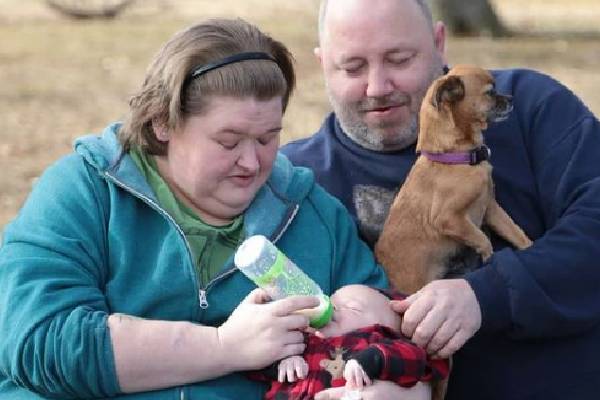 Amy Slaton is well known as the Twilight Queen, who is a vlogger on YouTube who most often publishes videos based on makeup. She runs the YouTube channel, Amy Slaton-Halterman which has more than 436K subscribers.

Besides being a popular YouTuber, Amy is also famous for being one of TLC’s stars of the reality show 1000-lb Sisters. The talented YouTuber has gained immense media attention over the years. However, we are known that Amy is a married woman and is also a doting mother of one.

So today, let’s get to know about Amy Slaton’s husband, Michael Halterman.

Married To Amy Slaton Since 2019

Amy Slaton exchanged wedding vows with her boyfriend, Michael Halterman, on March 15, 2019. The wedding ceremony was held in Nashville, Tennessee.

The pair first met in high school in their hometown of Dixon, Kentucky. It is evident that the couple is extremely compatible with each other. The partner dated each other for years before deciding to enter the matrimony.

It’s been quite a long time since the husband-wife duo, Amy and Michael, started dating. However, they are still so much in love with one another, which can be seen on their videos. Furthermore, Amy Slaton’s partner, Michael, also expresses his immense love for his wife in his social networking handles.

Amy Slaton and Michael have been married for a couple of years. The power couple welcomed their first child Gage Deon Halterman in late December 2020. Because of COVID-19, Amy and Michael’s family could not come to the hospital to see their baby boy. The pair expressed their emotions about meeting their child for the first time via their social media handles.

As a married person, the desire to have a child doesn’t sound crazy, but Amy Slaton’s bariatric surgeon, Dr. Charles Procter, had asked her to wait before starting a family, for at least two years. However, In early January 2020,  just after four months of her gastric bypass surgery, Amy Slaton revealed that she was expecting a baby with her beloved husband.

Michael Halterman Is A Mill Operator

Michael Halterman rose to fame as Amy Salton’s husband, but he decided to keep a low profile despite being married to a famous YouTuber. Furthermore, he keeps his personal life confidential.

Amy Slaton’s husband, Micheal Halterman, works as a mill operator at Shamrock technologies. The technology is one of the world’s largest processors of micronized polytetrafluoroethylene (PTFE).

Apart from his job as a mill operator, Michael stars alongside his wife in the series 1000-lb Sisters. Amy Slaton’s spouse, Michael Halterman, also has a YouTube channel where he streams video games and makes daily vlogs.

The channel has more than 3.47K subscribers and is popular among Slaton-Halterman fans.

The TV star, Amy Slaton, met the man of her dreams in high school and their romance blossomed soon after. Throughout her hard times on her weight loss journey, Amy Slaton’s partner had been by her side and is still helping her meet her goals. He also had been very attentive during Amy’s pregnancy.

For now, The husband-wife duo is living a blissful life with their son. They must be taking good care of their child.

The 1000-Lb Sister’s Star Amy Slaton and her partner, Michael Halterman, went on a vacation to celebrate their second anniversary. Amy did not initially share her trip plans with her fans but posted on social media about their vacation activities. The majority of comments on her photos were extremely supportive and filled with well-wishes for the couple.

Michael and Amy enjoyed their visit to Ripley’s aquarium. Amy and her beloved seem to travel and enjoy their new adventure after Amy’s weight loss. The husband-wife duo didn’t share about their child’s presence on vacation and the little one must have been in his parents’ thoughts.

After adding a new member to their family, the Halterman couple is the happiest they’ve ever been. Moreover, being parents have changed both Amy and Michael and they are enjoying their journey through parenthood.

Hence, Amy’s dream to start a family and build a family has come true. Thus, let’s hope to hear more of Amy Slaton’s husband and their family in the coming days.