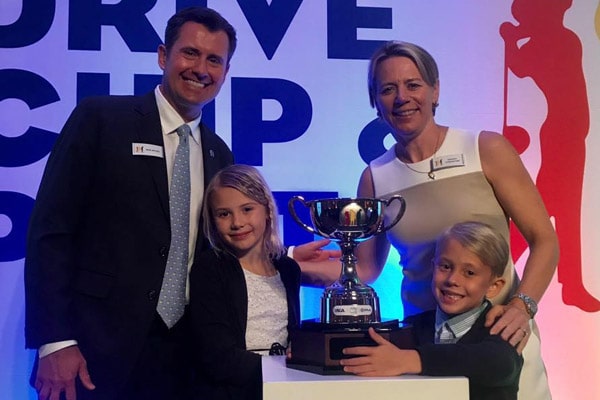 Annika Sorenstam's husband and the father of her two kids, Mike McGee is an entrepreneur. Image Source: Facebook/ Mike McGee.

Annika Sorenstam is a former Swedish professional golfer who is considered one of the best women golfers in golf history. Before retiring from golf in 2008, she had achieved success in ninety international tournaments making herself a female golfer with the most wins. Moreover, Sorenstam is the winner of 72 official LPGA tournaments. Likewise, she is a holder of various all-time scoring records.

Talking about the inner life of Annika Sorenstam, she is currently married to the managing director of her brand ‘The ANNIKA Brand,’ Mike McGee. Sorenstam and McGee have two adorable kids together, Ava Madelyn McGee and William Nicholas McGee.

Here, know some more facts of Annika Sorenstam’s husband and the father of two, Mike McGee.

Married To Annika Sorenstam Since 2009

Mike McGee proposed his love Annika Sorenstam with an engagement ring in August 2007. The engaged pair took some time to know each other well before getting married on 10 January 2009. They took the wedding vows some weeks after Annika ended her Hall of Fame career.

Sorenstam and McGee’s marriage ceremony took place at Lake Nona Golf & Country Club in Orlando, Florida. About 125 guests were present at their afternoon wedding ceremony and evening reception. According to the Golf World magazine, the minister at Christian Campus House at Trine University in Angola, Travis Wilhelm, officiated the nuptial ceremony. Sorenstam’s Swedish friend Maria Bertilskold was the maid of honor, whereas McGee’s best man was Stan McCamon of East Palestine, Ohio.

It was probably Mike’s first marriage. However, his wife Annika was previously married to David Esch.

It has been a decade since Annika is married to her beloved husband, Mike McGee. However, the flame of love between them is still the same. Moreover, they are proud parents to two gorgeous kids to add more love in their life together.

McGee’s eleven-year-long togetherness with his beautiful wife Annika made him a blessed father of two kids. He welcomed his first child with his spouse Sorenstam, daughter Ava Madelyn McGee on 1 September 2009. She arrived in this world about three weeks early.

We had a fun morning at the @TahoeTreetop ropes and zip line course. #family #tahoe ❤️🙏🏻 @ANNIKA59 pic.twitter.com/v3C3dB6gZU

Similarly, Mike and Annika gave birth to their second child together, son William Nicholas McGee on 21 March 2011 at 6:33 pm. He joined his mom, dad, and his big sister nine weeks earlier than the due date. Although Annika Sörenstam’s son William was born premature, he was completely healthy, weighing two pounds, one and a half ounces, and measuring 15 inches at the time of his birth.

Both kids of Annika and Mike have a great bonding with each other. The little ones of the couple are often seen with them on their social media pages. Although the overjoyed parents, Mike and Annika, never disclose their kids’ details, they do not hesitate to show them off via social pages.

Mike McGee is not just famous for being the managing director of the ANNIKA brand and as Annika Sorenstam’s husband. Besides, McGee is also renowned for being the American professional golfer, Jerry McGee‘s son.

Mike McGee’s father, Jerry, played on the PGA Tour and the Champions Tour. The 77 years old father-in-law of Annika won fur PGA Tour events in the 1970s. Jerry’s best finish in a major championship was T-5 at the 1972 Masters Tournament. Moreover, he was also a member of the 1977 Ryder Cup team.

This quote from my Dad always makes me smile. @usopengolf pic.twitter.com/lGY0D0sZs0

Furthermore, being the son of such a talented golfer, Mike also inherited some golf skills from his dad. He was a one-time record-setting pitcher at Mt. Union College. Moreover, intending to be in sports professionally, Mike McGee completed his bachelor’s in Sports Management from the University of Mount Union in 1997. After graduation, he is working actively as a golf agent and a businessman too.

Currently, Mike McGee and his long-time partner, Annika Sorenstam, live a happy and contented life with their two children in Orlando, Florida.

Annika Sorenstam retired from professional golf in 2008 but, after turning 50, was eligible for the 2021 US Senior Women’s Open. She started her family and ran a foundation for years, and now she has returned to the professional scene.

Moreover, in a thrilling competition, Sorenstam managed to win the US Senior Women’s Open title on her debut. The final tally for Mike McGee’s wife was 67-69-72-68-276, 12 under par and eight shots lower than Liselotte Neumann, who was the runner-up.

During her amazing comeback, Annika Sorenstam’s husband and two children were watching and cheering for her. They are undoubtedly proud of the Swedish golfer for adding another trophy to her tally.