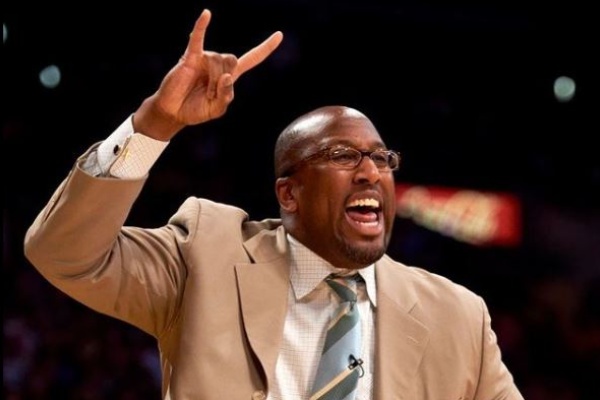 Carolyn is the long term wife of the coach Mike Brown. They are together even after a long period of marriage. Image source: Social media.

NBA Coach Mike Brown is known for juggling NBA teams in the short term. He started his career as an assistant coach for the Washington Wizards in the late nineties and has been on the coaching staff of five different teams since then. He has coached LA Lakers and Cleveland Cavaliers while winning altogether three NBA titles for Golden State Warriors and Indiana Pacers as an assistant. Currently, he is the assistant coach of GSW and head coach of the Nigerian national team.

Mike’s career has a lot of talking points, but his personal life is also full of surprises. Adding to his personal life’s equation is Carolyn Brown– Mark Brown’s wife. Carolyn and Mark have been together for quite some time, so let’s go through Carolyn’s life to know more about her.

Who Is Mike Brown’s Wife Carolyn?

Mike Brown’s wife Carolyn Brown is married to him for more than two decades. The couple has been together since Mike’s early days at Denver Nuggets back in the nineties. In fact, Mark and Carolyn met as strangers in a bar when Carolyn was 23 years old. After spending quite some time with Mike, she already knew he was the one.

Carolyn was a student at the University of Colorado at that time. The couple started dating without hesitation and got married eventually. Carolyn grew up in Evergreen, Colorado, and was adopted at 16 days old along with her biracial twin Liz Lockley. According to Cleveland com, the sisters never met their biological father, but they later found out that he was a coach and died. However, the two have met their biological mother and have gotten to know her family.

Carolyn Is A Mother Of Two Sons

Carolyn is just as good a mother as she is a wife. Mike Brown and Carolyn Brown are parents to two children- Elijah Brown and Cameron Brown. The elder son, Elijah, has been following the footsteps of his father. He played college basketball for the Butler Bulldogs. Later on, he transferred to the University of New Mexico for the 2015-2016 season.

Their younger son is Cameron. He is enrolled at Case Western University as a biology major. He is a football player and plays defensive end. Cameron also likes baseball. Not only this, but Mike and Carolyn are also guardians to Canadian national team standout Nirra Fields. The couple has been excellent parents to all the kids. In fact, Elijah calls Carolyn The Best Mom Ever.

Where Is Carolyn Brown Now?

After giving birth to two wonderful sons and nourish them into young men, Caroyln is now living her life with her husband, Mike. Mike and Carolyn share such an impeccable bond that only a few can have. And as stated earlier, the couple even took guardianship of Canadian basketball national team player Nirra Fields when enrolled at Mater Dei High in Santa Ana, California.

Carolyn has been a wonderful wife and a mother only lucky ones can even dream of. Now in probably in her fifties, Carolyn is set on a long ride with her husband. As the couple maintains strict secrecy about their personal life, there is no solid information about Carolyn’s work. Still, we are certain she must be engaged in something she is passionate about, Let’s hope we get to see this couple together for many more years to come.