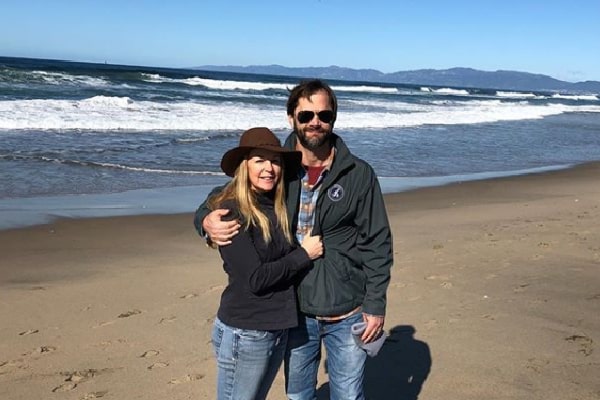 Renee O’Connor is an American actress popular for her role on the tv series Xena: Warrior Princess as Gabrielle. Besides acting, she is an accomplished producer and director as well. Making her acting debut at age 17, she has come a long way in her career since 1989.

Besides having a thriving career, Renee O’Connor has won several hearts with her striking looks and personality. Hence, the 49-year-old’s fans are beyond excited to learn about Renee Connor’s husband and their grand wedding. Henceforth, here is everything you need to know about the gorgeous ocean-eyed actress, Renee O’Connor’s wedding with Jed Sura.

Renee O’Connor is an exceptionally private person. She is in the entertainment world for 31 years, and thus, she must have gotten well-versed at separating personal from professional life.

Furthermore, there isn’t much information about the love birds’ wedding, but they sure maintain a blissful wedding life with kids. Besides nurturing a family, they also run a company together.

The O’Connor-Sura Couple Runs A Theater

Couple that shares the value and ideals are pretty healthy. An example of such a strong bond is Renee O’Connor’s husband and hers since they are life-partners and business partners.

The couple shared their vows in 2017 and must have an elongated romance. But most importantly, they have been showing their chemistry the best via their work.

Renee O’Connor’s husband, Jed Sura, worked in several movies, including his appearances in Grey’s Anatomy. He has further shared his platform with Renee, his gorgeous wife, on acts like Little Fish Theatre. They further co-produced and starred in the feature film, Watch the Sky.

The talented couple runs a theater company, The House of Bards Theatre Company, together. Their company’s goal is to produce classical and contemporary professional theater to educate audiences of all kinds. They further aim to challenge individual viewpoints and cultivate an appreciation of literature. Pretty visionary, eh?

Unfortunately, O’Connor- Sura couple is pretty secretive about showing their love out on social media. But they sure love their kids and share pictures of them now and then.

We might not have details of their marriage, but the couple welcomed a beautiful daughter, Iris Sura O’Connor, in 2006. The 14-year-old has her Instagram with almost 500 followers and a post. Furthermore, Renee O’Connor’s daughter is also an actress who has recently joined her mom in theatre.

Irish has previously performed in musical theater roles such as Dorothy, Jane Banks, and Annie. She further took the part of Puck in Midsummer Night’s Drum.

Renee O’Connor and Jed Sura are also parents to Connor’s first child, Miles William Muir. She was blessed with an amazingly talented actor on September 22, 2001, with ex-husband, Steve Muir. Miles is an actor known for the movie, Watch the Sky. He further acts along with his half-sister, Irish, in his parents’ theater.

Well, Renee O’Connor is pretty blessed with a happy family for now. However, she prefers to live in privacy and maintains extreme privacy, even on her Instagram posts. Therefore, to expect O’Connor to reveal details about their marriage is almost impossible.

Let’s hope the pair’s marriage will last for eternity, and they live a comfortable life in privacy.