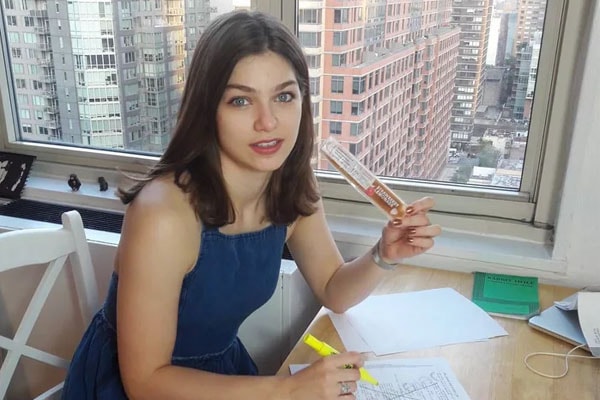 The American actress, Catharine Daddario is the youngest sister of siblings Matthew Daddario and Alexandra Daddario. The young social media star has starred in a few hit movies including Lake Artifact, and Stronger Than Pretty.

The youngest child of lawyers Christina Daddario and Richard Daddario, Catharine is an aspiring actress. Despite not coming from the acting background, the Daddario siblings share a mutual interest in acting, and all of the siblings are a social media sensation. The active ballet dancer, Catharine, has striking good looks and arresting personality and resembles a lot like her sister.

Catharine is Close with Sibling Alexandra

The Daddario sisters are obsessed with one another and are not reluctant to showcase their love for one another on the social media. Besides all the healthy fightings between the sisters, the siblings are very close to one another. In a random Instagram post from March, little sister Catharine describes her big sister as the most amazing, lionhearted, and energising sister. Likewise, Catharine believes that she has the best big sister anyone could dream of. Besides that, the stunning celebrity sibling went to the prom together as a couple.

The twenty-five years old Stronger Than Pretty actress is not the only daughter of the family and shares her parents with siblings, Alexandra and Matthew Daddario. The middle child and Catharine’s elder brother, Matthew has studied business and acting. Likewise, the eldest sister, Alexandra is a prominent actress and has starred in various movies including All My Children, Percy Jackson film series, and so on. Little sister, Catharine, is also following her sibling’s footsteps into becoming one of the greatest actresses in the century.

Had a great time with the #family at the Percy Jackson 2 premiere! A really fun movie-go see it on August 7th!

The little sister, Catharine has gained the attention of the media and a substantial social media followers through the help of her famous siblings. The actors, Matthew and Alexandra, are responsible for Catharine’s contact with fame and popularity. The beautiful siblings love spending time with one another, and the relationship between the brother and sisters is admirable.