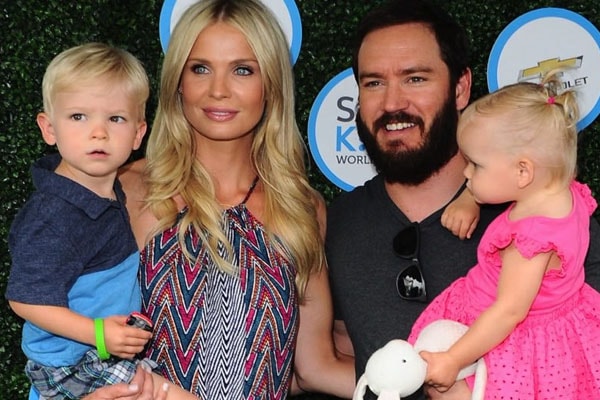 Mark-Paul Gosselaar‘s wife Catriona McGinn is an advertising executive. They are a proud parent to two children. Catriona McGinn and her husband Mark-Paul had their first child, a son named Dekker Edward Gosselaar in October 2013 and later on had a daughter named Lachlyn Hope Gosselaar.

Mark-Paul also has two kids, Michael Charles Gosselaar and Ava Lorenn Gosselaar with his ex-wife, Lisa Ann Russell. But after 14 years of marital relationship, the couple announced their separation.

Pretty much, every mother faces a challenging time to deal with the children especially when they aren’t their own. Despite the fact, Mark’s wife Catriona McGinn has already dealt with these problems. She might seem like she leads a perfect life with Gosselaar’s ex-wife’s kids and hers’ own.

Mark and his current wife Catriona know the actor’s divorce with his former wife was hard on children, so they try their best to create a good environment for them. McGinn and Mark keep things peaceful for the sake of their kids’ betterment, and they seem to get along well.

Over the years the couple has brought their kids to several premiere and kids events.

Starting a family with somebody else’s kids is quite difficult in the first place. Nevertheless, Mark-Paul wife Catriona cordially adjust with Mark-Paul’s ex-wife Ann’s children. After her arrival, she has started to take good care of them. Adorable pictures of Catriona and kids are often shared in social media.

The 44-year-old, Mark-Paul and Catriona are together since 2012 after Mark’s separation with Ann Russell. The kids and the partner are in a good relationship now, and it is apparent in their loving bond together for all these years.