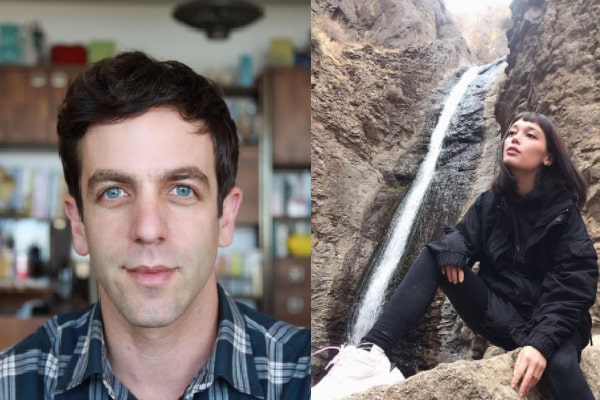 Celebrities jump from relationship to relationship now and then. Furthermore, a few celeb-couples have managed to raise several eyes and question its legitimacy. Among such are Ceilidh Garten and B. J. Novak‘s relationship back in 2016. But the question is, are the couple still together?  If not, what is The Office actor B.J. Novak’s relationship status?

To find out, hang on until the end to know everything about Ceilidh Garten and B.J. Novak’s relationship and their current status. Let’s go.

Perhaps yes or perhaps no. Aforementioned, The Office star B.J. Novak started dating Instagram model Ceilidh Garten back in 2016. Their togetherness bothered several people, and an insider even confessed that B. J. Novak’s girlfriend looked like a 12-year-old.

Well, the 21-year-old at the time, Ceilidh Garten, is believed to have an IQ of a genius, which barely nullified their massive age difference. Moreover, according to Page Six, the couple met online after Novak reached Ceilidh via social media.

Furthermore, B. K. Novak’s girlfriend, Ceilidh, reportedly visited Novak in LA several times. Well, it’s a matter of great concern to Novak’s fans and thus want to know about where the couple stood. However, the secretive couple doesn’t share any pictures of them in the public domain.

The best-selling author of The Book With No Pictures, Novak and Ceilidh Garten, still follow one another on Instagram. So, guess the couple’s still together without making any headlines and enjoying love secretly. Therefore, patience shall his fans be to know Novak’s relationship status.

Until then, let’s talk about the famous Mindy-B. J. relationship tale.

Mindy Kaling And B.J. Novak Were A Thing

Before finding an Instagram model, Ceilidh Garten, in 2016, B. J. Novak was rumored to have a relationship with former Office co-star Mindy Kaling.

Although neither of them confirmed their relationship, Mindy approved, not knowing her relationship status with B. J. back in 2015. During an interview with InStyle magazine, Mindy further confessed that she and BJ had a strange relationship and doubted if ‘romantically charged camaraderie with loud arguments’ would be new Facebook relationship status.

While B.J. remained silent, his former partner, Mindy, revealed being heartbroken and beautiful because of him. Well, Mindy and B. J. Novak have known one another for over a decade, and their on-and-off relationship has turned into a beautiful friendship.

Furthermore, Novak confirmed that anyone who’s dated Mindy or him are intimated by their relationship and often. He further said that people often ask them if they were a couple.

Well, they are more than just friends as Mindy feels Novak as a family and reveals that BJ is a godfather to her daughter and comes over like once a week.

Well, Mindy and B. J. understood that the pair would never do well as a couple. So, today, they are above friendship and are like a family.

On the other hand, B.J. Novak might still be in a relationship with his young lover, an Instagram model, Ceilidh Garten. Although they are secretive, let’s hope to hear more of them in the coming days.