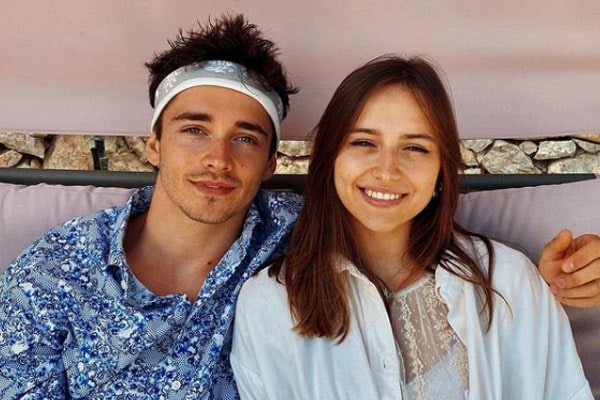 Charles Leclerc is one of the most successful F1 racing drivers, currently racing for Scuderia Ferrari under the Monégasque flag. Since his entry into Formula One in 2018, Leclerc is gaining immense stardom. Almost every motorsports fan knows about his professional life, but only few know about his girlfriend, Charlotte Sine.

So, who is Charles Leclerc’s girlfriend, Charlotte Sine, and how their love life is going? Let’s find out.

One of the F1’s best young drivers, Charles Leclerc’s partner, Charlotte Sine, is a Monegasque resident and currently studying architecture. She is a skilled artist and has a pretty creative streak. You can find and buy the self-declared Monaco-based future architect Sine’s creations on her official store.

Moreover, the social media influencer Charlotte Sine has her own custom shoe brand. Also, she, with her sister Victoria Sine, sells stunning hand-assembled jewelry, which people can buy via @secrettreasurecharms.

On top of that, the Monegasque resident has reportedly studied music for the past decade. She plays piano just like Charles does and has also sung opera in the past.

Charlotte Sine came into this world on 19 September 1999, in Monaco. She is the daughter of a general manager of the Société des Bains de Mer, Emmanuel Sine. Similarly, her mom is Pascale Sine, who lived next door to her current boyfriend, Charles Leclerc’s family.

Furthermore, the Instagram star with 331K followers at the moment, Sine, can speak English, French, and Italian fluently. Also, she is a bit good at speaking Russian.

Leclerc And Charlotte Openly Dating Since The End Of 2019

It is no secret that Charles Leclerc and Charlotte Sine are dating for a while now as the pair have been open about their relationship. Sine shared her first photo of getting cozy with the Ferrari driver, Leclerc, in December 2019. However, according to reports, they began seeing each other a few months before that.

Furthermore, Charles Leclerc’s girlfriend, Charlotte Sine, used to post snaps of them on her Instagram page, mentioning Leclerc as her one. But, Leclerc did not post any pictures with Sine at the beginning of their relationship.

However, lately, he also shares pictures with his girl on his social media handles, letting all his fans know he is deeply in love with her.

We wish the romantic pair all the best and hope for many more in the upcoming days.

Charles Leclerc had to apologize to his girlfriend, Charlotte Sine, in May 2020 after he accidentally ignored her for Twitch. In May, Sine had to wait for almost 25 minutes downstairs because her boyfriend was not paying attention to his phone and had headphones on. Soon, she realized that she could only reach him via Twitch.

Resume of the stream:
My girlfriend had to buy a subcription to my Twitch to be able to ask me in the channel chat if I could open her the front door. She waited 25 mins downstairs as I couldn’t hear my phone, I had the headphones and was very focus on my rally race😂

So, Charlotte sent two messages in Charles’ Twitch telling him to open the door. The F1 driver saw the chat and let his lover into their apartment. Also, he even had a brazen laugh at his girl’s expense with his Twitch viewers. According to Charlotte, she had to pay $5 to subscribe to her boyfriend’s Twitch channel and send her message.

However, Charles was a bit happy too from the incident as he gained a subscription. But, sadly, Charlotte subscribed to his Twitch for a month only.

Despite this small snafu, Charlotte is still the biggest fan of Charles. Her boyfriend won the first race of the 2022 season and Sine celebrated it on her Instagram.

Before moving on with Charlotte Sine, Charles Leclerc was in a romantic relationship with an Italian beauty named Giada Gianni. Reportedly, the former pair dated for over four years.

Charles and Giada got together at the starting of 2015. However, after being together for some years, things started to get messy between them. So, they called an end to their relationship in November 2019, with Giada confirming the news.

Moreover, Charles Leclerc’s ex-girlfriend, Giada Gianni, announced on an Instagram video that Charles decided to separate from her to focus on the remainder of the F1 season. She said that Charles left her because he wanted to devote himself only to Ferrari.

But in the present, Charles Leclerc is gaining fame as a Ferrari driver and is also in a relationship with his girlfriend. Hopefully, he won’t repeat the same mistake and break up with his current girlfriend, Charlotte Sine.