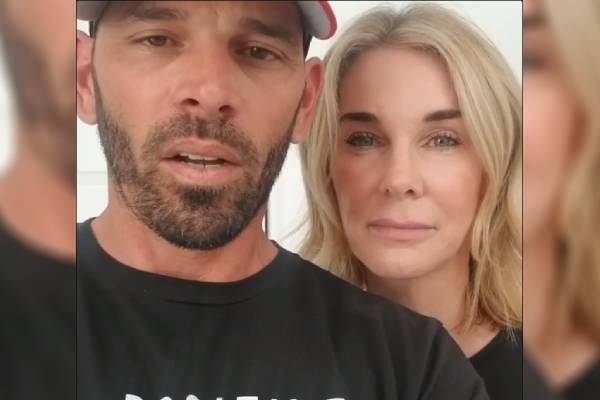 Born Christopher Michael Woodward, Chris Woodward is a renowned manager of the Texas Rangers of MLB. He is famous for putting together new strategies and analyzing gameplay. In addition, the manager served two baseball teams as a coach for about four years. Not only that, Chris is also a former professional baseball player who has played for seven teams over a decade.

Much said about Woodward’s professional life, now let’s take a look at his personal life. Well, the baseball manager is a devoted family man. He has been married to Erin Woodward and is a doting dad to his children. If you didn’t know that, let’s get to know Chris Woodward’s wife and children in this article.

Erin Woodward grew up in Toronto with her family. As a child, she used to play baseball with her dad and developed her love for the sport at a young age. She must have had a happy childhood along with her family. The Rangers manager met his wife when he was playing for the Toronto Blue Jays, and have been together ever since.

The lovely pair tied the knot in 2000 and have been enjoying marital bliss since. As it has been over two decades since their marriage, the Woodward couple has created a beautiful family of five.

Erin Woodward is a trauma nurse by profession. She has been serving in the health sector for a long time now. During the global pandemic, the manager’s wife worked hard and fought against the situation as a front liner. She worked for over 12-hours shifts in the COVID-19 ICU at Banner Desert Medical Center in Mesa.

As mentioned earlier, Erin grew up playing baseball with her dad since her childhood. Alongside being a quick learner, she is also well versed in managing and coaching baseball. The talented manager’s wife also manages a Little League Team.

Rangers manager and his spouse are blessed with three amazing children. Just within a few years of their marital journey, they welcomed their first child, Sophie Woodward, in the early 2000s. But the couple faced problems while conceiving another baby.

Chris Woodward’s wife suffered more than ten miscarriages within eight years. It must have been extremely hard for Erin and her partner. That was when the Woodward couple considered adopting a child and adopted a boy named Mason Woodward in 2008. In an interview with Nbcdfw, Erin disclosed that she had always wanted to adopt a kid.

Furthermore, the lovely couple also shared that the adoption helped them restore their faith. After two years of welcoming Mason into their family, they gave birth to their second biological child, Grady Woodward.

Additionally, Chris Woodward’s daughter has grown up to be a beautiful woman. She has already graduated from high school. She is into dancing and is highly involved with the Elektro Dance Academy. Moreover, Chris’ little girl competed on NBC’s World Dance Tour season 3.

On the other hand, Chris Woodward’s sons have also grown up and are enjoying their teenage life. They must be attending a school and focusing on completing their high school education. Let’s hope Woodward’s children will achieve great success in their careers and live a wonderful life.

Nevertheless, Chris Woodward’s wife is doing well both in her personal and professional life. Not only that, but the mother of three has also been supporting her family without compromising her career and dream. We wish Erin Woodward a life filled with love and glory.