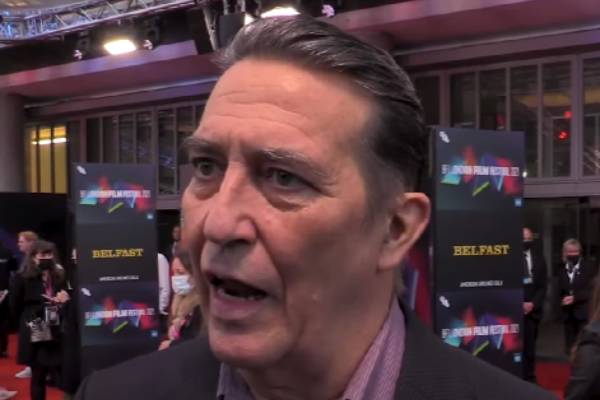 Ciaran Hinds is married to Helene Patarot and they have a daughter named Aoife Hinds together. Image Source: Social Media.

Ciaran Hinds is an Academy Award-nominated Irish actor known for his versatile acting. The 69-year-old star was born in Belfast, Northern Ireland. He has appeared in numerous roles in his acting career, ranging from criminal to heroic characters. Furthermore, Ciaran has been part of some big films and series like Game of Thrones, Harry Potter and the Deathly Hallows – Part 2, Ghost Rider: Spirit of Vengeance, etc.

Apart from his outstanding acting career, Ciaran is a loving husband and a caring father. The actor has been together with Hélène Patarot since 1987 and welcomed a baby girl, Aoife Hinds, during their marriage. Furthermore, it seems both his spouse and child are into acting.

Hence, in today’s article, let’s get to know about Ciaran Hinds’ partner Hélène Patarot and his daughter Aoife Hinds.

Met His Partner At A Set

Ciaran Hinds met his partner Hélène Patarot on the sets of The Mahabharata. In 1987, the pair worked in Peter Brook‘s mini-series and fell in love with each other.

Some sources claim that the lovebirds are yet to tie the knot. But, in many interviews, Ciaran has referred to Hélène as his wife. However, the pair’s exact marriage date and details have not been revealed yet. Nonetheless, Hinds and his spouse have been together for over three decades. Their marriage is an inspiration to all aspiring lovers worldwide.

In their blissful relationship, Hélène has given birth to their daughter, Aoife Hinds. She was born in 1991, four years after the pair got together.

Ciaran Hinds’ Wife Is An Actress

Ciaran’s spouse Hélène Patarot is a French-Vietnamese actress. She has worked on many projects throughout her life. Her first notable acting credit was Life Is a Bed of Roses in 1983.

Hélène began her career in the theatre before making it to the big screen. However, she has been part of some big movies like You Don’t Choose Your Family, The Lover, and Les cinq parties du monde.

In addition, Ciaran Hinds’ wife also released a self documentary in 2009 called In the Eyes reflecting her personal life.

Their Daugther Was Born In London

Aoife Hinds was born in 1991 in London. She used to go to Guildhall School of Music & Drama every Saturday morning for violin and piano classes.

However, Ciaran Hinds’ daughter only lived in London until she was ten years old. The celebrity kid moved to France with her parents in the early 2000s. Life was completely different in Paris compared to London.

Aoife visited the Luxembourg Gardens in the French capital as her school was just around the corner. Ciaran’s little girl also used to visit him during his shoots. One day, she went to the sets of Tomb Raider to watch her father. While coming home, the make-up artist gave her a black eye so she could prank her mom.

Ciaran Hinds’ Daughter Is Following In His Footsteps

Aoife Hinds is following in Ciarán Hinds and his wife Hélène Patarot’s footsteps. The 31-year-old wanted to become an actor since she was a child. Growing up, seeing her parents travel around for work seemed pretty exciting for her. The lifestyle was appealing and different from the usual nine-to-five job.

Well, Aoife began her acting career in the late 2010s. However, she has already established herself in the acting industry starring in TV series like Derry Girls and Normal People. Her performance as Helen in Normal People was loved and appreciated by the audience.

Furthermore, Ciaran Hinds’ daughter Aoife Hinds has twelve acting credits to her name. Her two upcoming projects, Cottontail and Hellraiser, are on the stage of post-production.

It seems like Ciaran Hinds’ wife Hélène Hélène Patarot and his little girl Aoife Hinds prefer to live their life away from the limelight. It is very difficult to hide from the spotlight in the acting business. Nonetheless, the mother and daughter have managed to do that and are not active on any social media platforms.

Aoife has been racially abused in the past. She has been a subject of racial slurs while filming in Dublin, Ireland. Maybe, this is also why she prefers to stay away from any social media sites and apps.

Furthermore, Ciaran has mentioned in his past interviews that he loves to live a quiet life and doesn’t enjoy a glamorous and luxurious lifestyle. In fact, Hinds mentioned he still travels on buses and metros. Moreover, the Irish actor doesn’t own a car. Well, it seems like his partner and child have adapted to this lifestyle as they are very quiet about their personal lives.

Similarly, the identity of Aoife Hinds’ boyfriend/husband is a mystery due to her quiet lifestyle. Looking at her age, she could either have a boyfriend or a husband, but it has not been confirmed yet.

Nonetheless, we wish the Hinds family all the best for their future.

Aoife is a Scottish word. It means beautiful or radiant.