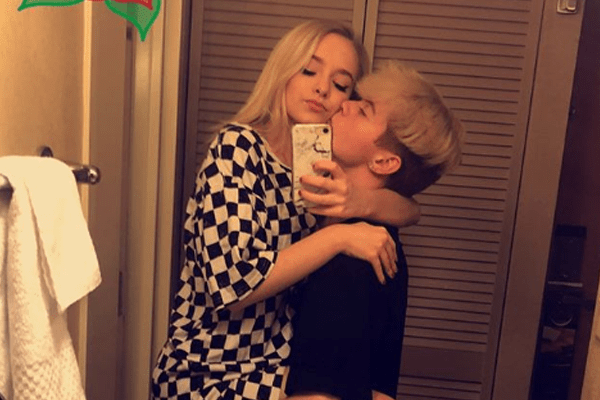 Lately, for many people love has been in the air. Not sure about others but, the adorable pair of Cody Orlove and Zoe LaVerne has undoubtedly been feeling it. And, they do not leave any chance of showing it. Cody Orlove kissed his pretty girlfriend Zoe LaVerne and shared it on his Instagram profile.

Cody is a widely known Musical.ly user or user who has also gained new popularity on YouNow. And his pretty girlfriend Zoe is also a Musical.ly sensation.

Fans all over denote the lovely couple of Cody Orlove and Zoe LaVerne as “Zody.” They have a joint YouTube account under their belt, “Cody & Zoe.”

Musical.ly acted as a bridge between the two lovebirds. And since being in a relationship, there is no boundary of happiness for the pair. Both Cody and Zoe love sharing photos of them being together on their social media profiles. Just sometime before, Cody Orlove kissed his girlfriend Zoe Laverne and posted it on Instagram.

It seems, the pretty Zoe LaVerne took the initiative to approach her boyfriend, Cody Orlove. When Cody was about to reach a 100K fans on the app Musical.ly, Zoe wished him luck. Later they both added one another on Snapchat, and the duo clicked.

What do they love about one another?

As mentioned above, the cute lovers have a joint YouTube account. They usually post vlogs related to the couple. In a Q&A with their fans, Cody stated that she loved his girlfriend Zoe’s goofiness and adored her smile. And as for Zoe, she loves her boyfriend Cody’s eyes. She also added that Cody is a down to earth person.

The musers, Cody and Zoe wanted to keep their relationship private. Though they decided to share their delights with their fans.

There hasn’t been many ups and downs in their relationship, but some fans speculated that the pair has broken up. So to reassure all their fans, Cody and Zoe uploaded a video on their joint YouTube account explaining they are still together.

They are literally “relationship goals” for many of their fans. Seeing the bond and the closeness between them, it doesn’t feel like they have been in a relationship for less than a year. And it will not end any time soon.