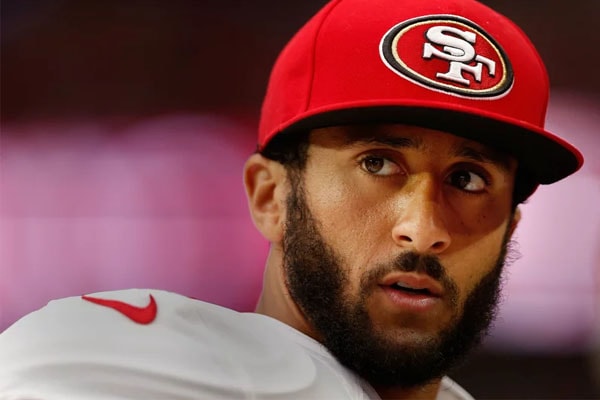 The new face of Nike’s 30th anniversary “Just Do It” campaign, Colin Kaepernick‘s Net worth is estimated to be $25 million. Colin earned his fortune from being a prolific American football quarterback plus having different endorsements including Nike’s.

Colin is a man with multiple talents, he is not only a football player but also a baseball player. In 2009, when Kaepernick was drafted in the 43rd round by the Chicago Cubs he announced that he will play football at Universiy of Nevada.

Colin Kaepernick Net Worth and Earnings

In 2014 Colin had signed a record seven-year $126 million deal with the San Francisco 49ers. And after his “kneeling during the national anthem” protest, he left a ton of money behind. Later it emerged that Kaepernick made only 31% of the money from the deal.

Over the six seasons of the NFL, Colin Kaepernick’s earning was a little less than $7 million a year as his earning totaled to less than $43.5 million. Kaepernick’s $12.3 million signing bonus and $645,000 salary were only guaranteed in 2014. Since he didn’t make it to either first or second-team All-Pro and also the 49ers didn’t reach the Super Bowl, Colin lost $2 million in 2015.

As mentioned earlier Nike revealed Colin Kaepernick as one of the new faces of “Just Do It” campaign alongside the likes of Serena Williams and Odell Beckham Jr.

Sports agents have suggested that the Kaepernick’s deal could be worth millions of dollars a year. This is surprising because Kaepernick is actually not playing in the NFL. As per the Wall Street Journal, the contract is the “Top of the line” for a football player. No exact figures have been disclosed for what the contract would be worth.

Believe in something, even if it means sacrificing everything. #JustDoIt pic.twitter.com/SRWkMIDdaO

One of the faces of Nike’s ad, Odell Beckham Jr. had signed a deal with Nike which would bring him about $5 million a year. So Colin Kaepernick must also earn somewhere around that range from his Nike’s endorsement.

Not just Colin Kaepernick’s Net worth but his heart is also grand. In just over a year he donated over $1 million of his NFL income to different social justice charities. Despite not being able to play in the NFL since 2016.

As Colin says, it was never for him but has been and will always be for the people.

Even after not being an active member on the field there has been a huge growth in the net worth of Colin Kaepernick from 2015.

In 2015 Colin had an estimated Net Worth of $20 million and in 2018 with an increment rate of 25% of it is estimated to be at $25 million. Plus with Nike’s endorsement, Colin Kaepernick’s Net worth will increase even more.