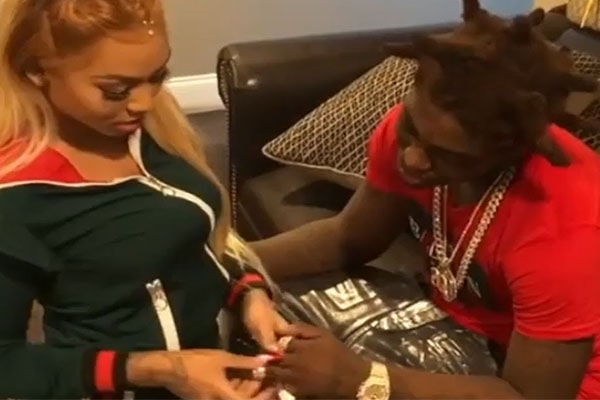 American rapper Kodak Black has had a notorious life and is known to get in trouble with law administration on multiple occasions. He was recently released off prison in August after serving seven months in jail after he was seen in a video where there was a kid in the presence of a gun as well as marijuana. His love life has been a topic of interest too with his relationship with Cuban Doll being in the news too.

Kodak Black has been dating the Instagram model Cuban Doll for some time now. They started dating in late 2016 and the two are ever present on Instagram showing their love for each other. Kodak recently flaunted his love life and showed off to his fans by making Cuban Doll propose her by getting on her knees and then showered her with a ton of money, making sure everybody saw his luxuries.

There have been rumors that Kodak Black might have broken up with his girlfriend Cuban Doll and these rumors might just be true as Kodak has cleared out his Instagram page and there are no photos of him and Cuban Doll has also deleted all photos of her boyfriend Kodak. As far as Kodak’s new girlfriend goes, there hasn’t been news on it yet.

Cuban Doll and Kodak Black started dating at the end of 2016 and two shared an intimate relationship and it was there for all to see. The two are constantly seen togther on Instagram as they can be seen having a good time. They loved each other very much and made sure that everybody knew about it through their Instagram posts.

Kodak loves to falunt his money as well as his girl and he did exactly that with Cuban Doll. He made her get on her knees to propose him. If that wasn’t enough, he then showered her with a lot of money, showing off his luxurious lifestyle.

As far as Kodak’s new girlfriend goes, there’s no news on it as of now and we don’t know if she even has a girlfriend. Having been in jail for seven months, it seems logical that he wouldn’t have a girlfriend at this time.