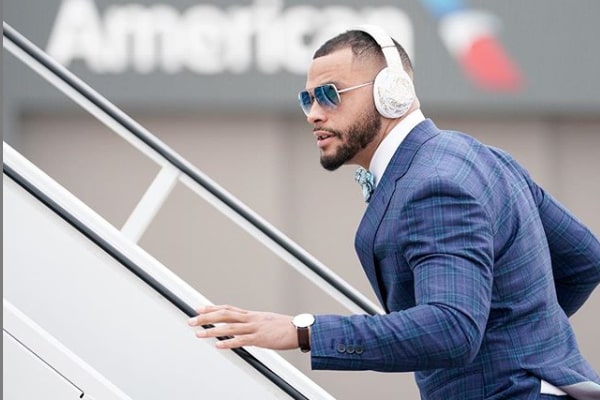 Dak Prescott is a humble and secretive man therefore, he has kept his relationship away from the social media. Image Source: Dak's Instagram.

Born as Rayne Dakota “Dak” Prescott, Dak Prescott has brightened his name as an American footballer quarterback for the Dallas Cowboys of NFL. Starting his professional career since 2016, Prescott achieved success steadily.

But can Prescott’s relationship be compared with his successful and steady career? Let’s find out who is Dak Prescott’s girlfriend and talk about the long list of partners he dated in this article.

Who Is Quarterback Dak Prescott’s Girlfriend?

NFL quarterback players are multimillionaires and some high-profile athletes. Therefore, they are heavily scrutinized. Among the most liked faces is former fourth-round NFL Draft pick, quarterback Dak Prescott.

When it comes to Dek, he is pretty secretive. Suffering from back to back tragic events, from losing his mom to cancer in 2013 and brother, Jace Prescott in April 2020, he has refrained from highlighting his personal life from the social media.

Furthermore, when it comes to Prescott’s girlfriend, he is highly guarded than ever. Currently, he is linked with the I.G. model, Ireland Borba.

Sports Gossip linked the pair back in 2019 as and told that they were spotted at Top Golf in Tampa. Furthermore, the site also mentioned a video of Dak hanging out with Ireland over the weekend.

Aforementioned, Dak Prescott is very secretive and keeps his private matters away from the limelight; he hasn’t shared any pictures about his love life on his Instagram.

Likewise, Prescott’s girlfriend, oh well, supposed girlfriend, Borba’s Instagram, is manicured as well. Both the parties are yet to come out and address the rumor. Therefore, until then, we can only speculate.

As a handsome young man with a lucrative career, quarterback Dak Prescott is quite famous amongst women. Even during his rookie years, Dak dated a gorgeous model. Yasmine Nicole.

Dak Prescott’s ex-girlfriend, Yasmine Nicole, is a successful model and a good human. The former couple dated in 2017 briefly. Throughout Dak’s career, he was linked to multiple women, but he never commented on any of them.

However, Prescott’s former partner had mentioned about the pairs’ relationship vaguely on social media. It looks like the couple had a troubled relationship, and the career progression was a significant reason for their breakup.

When Nicole was asked about their break up on Instagram, she said that they both have successful careers that played its part in their relationship. She further wrote that there was nothing serious and that she values Prescott as a dear friend even today.

It looks like Dak Prescott’s ex-girlfriend is a genuinely kind person to come clean and request her fans to stop asking about Dak and her relationship.

The two-time Pro Bowl passer, Dak Prescott, was linked with the Playboy model, Dallas Nicole Parks, in 2016. They were reportedly dating in 2016, but the Cowboys allegedly told him to cool it, and things were iced after that.

Parks took her frustration to the Twitter and bashed Dak as a fake character. There were multiple enraged tweets. Shortly after, Prescott’s alleged girlfriend at the time explained that her account was hacked, and she was drunk.

The Playboy model was also rumored of dating  Johnny Manziel. Thus, she came up with another tweet, revealing that she never dated Johnny and Dak whatsoever.

Responding to the tweet, Prescott too poped up a tweet where he said he didn’t even know who Dallas Nicole Parks was. Similarly, Dak Prescott found it hilarious as he was linked to a girl named Dallas because he plays for Dallas.

Funny Fact: Linked to a Girl Named Dallas that I Don’t Even Know just bc I play for Dallas 😂 lol “come on man”(MNF Voice)

Well, it’s pretty fishy as the rumored couple had pictures together because Dak doesn’t know Dallas. But who knows, it’s a world of technology, isn’t it?

According to Terez Owens, Nouri received flowers when she was staying at a Dubai Hotel. Prescott supposedly sent the flowers.

The rumors eventually vanished as they were not spotted or showed any signs of dating. But being a famous face is quite exhausting as you cannot follow or unfollow people independently without making headlines. Thus, Prescott following beautiful Estrella was reported by Sports Gossip in October 2019.

Let’s hope Dak Prescott’s girlfriend comes out of the cave sometime in the future and shocks us with their phenomenal chemistry.