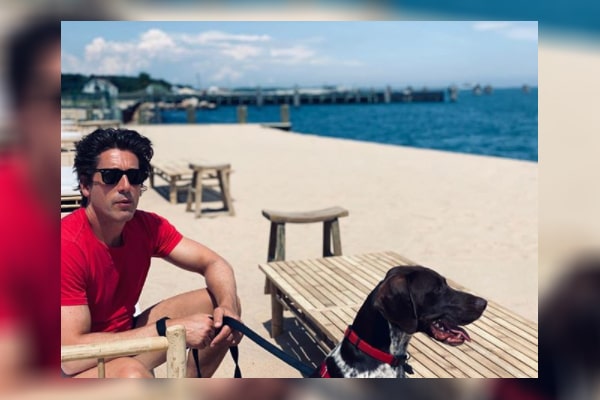 Although David Muir's relationship status is not public, he surely loves his work and his dog. Image Source: Muir's Instagram.

David Muir, born as David Jason Muir in 1973, is an American journalist and the anchor of ABC World News Tonight. From being a primary substitute anchor on ABC’s World News Tonight with Diane Sawyer to succeeding in 2014, Muir has come a long way.

Furthermore, multiple awards winner, including Emmy and Edward R. Murrow for his journalism, David Muir was named one of the ’12 to Watch in TV News and was listed as one of People Magazine’s Sexiest Men Alive 2013 and 2014, respectively. Hence the heartthrob has filled the hearts of gazillions with keenness regarding his relationship status. Therefore, we are here to quench your thirst on the matter. But, refrain from disappointing yourself until the end.

David Muir Is Probably Married To His Work

No, David Muir is not married but is taken by his job. Thus, Muir being a bachelor is excellent news for his admirer and him spending most of his days working is kind of a bummer at the same time.

One of the Sexiest man alive, David Muir, fell in love with news anchoring from a very young age. According to People, he revealed that he’d play with his friends and excuse himself to watch the news at 6 p.m. Hence, his life-long passion paid off when Muir took over Diane Sawyer as an anchor of ABC’s World News Tonight.

Well, David Muir loves responsibility and no big responsibility compared to conveying correct information of the nation to its people. So, Muir’s wife, aka his work, is in a happy relationship, and they don’t seem to part ways anytime soon.

Besides Muir’s affair with his work, he is an avid dog lover and has adopted a pup. They spend quality time and chase sunsets together. Sounds like relationship goals? Heck, it is!

In all seriousness, Muir’s significant time is taken over by his work, and the handsome man might not even have time for himself. However, counting all the possibilities, David Muir’s wife could be enjoying some cozy vacation with him, and he has maintained secrecy.

Whichever the case is, let’s hope David Muir is enjoying his life to the fullest with his cute dog, his dream dog.

Well, the thing about being famous is that your admirers are free to make judgments for you. Even speculating your gender at some point as it happened with the talented host, David.

Muir was reportedly in a relationship with an ABC colleague Gio Benitez. The rumors began when they were spotted together several times together back in 2015.

However, the speculations annulled after Gio got engaged to his husband, Tommy DiDatio, in Septemeber 2015. The couple got married in April 2016.

Kate Dries Addressed David As Her Boyfriend In 2015

David Muir’s relationship did not just turn up once but twice in 2015. An article titled ‘Reports Indicates My Boyfriend David Muir Is A ‘Monster'” emerged in 2015. Kate Dries claimed herself of being David Muir’s girlfriend and defended him via the article.

Furthermore, the article read Kate and David attached from the start and went on to the part where the writer confesses Peter Jennings to be her first love. Kate added that her feelings for Peter were vanquished during her relationship with David.

Well, that’s not the end as Muir’s supposed girlfriend was determined to prove her point on the comments. She continued to claim a few photographs were taken by her, and Muir’s admirer went on to question and claim him as their lover.

The rumors were never confirmed, and there are no bases to prove their relationship.

Well, David Muir’s public persona doesn’t define him as a person, and that is the reason to respect his willingness to keep certain parts of his life confidential. Therefore, let’s hope Muir’s marriage news surfaces soon or at least talks about having a partner sometime in the future.