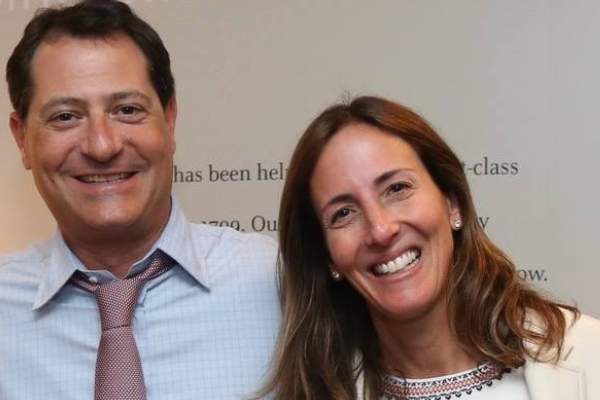 David S. Blitzer is a popular name in the sports world. He is the managing partner and minority owner of several sports teams, including the New Jersey Devils, Philadelphia 76ers, Cleveland Guardians, Crystal Palace F.C., FC Augsburg, ADO Den Haag, Waasland-Beveren, Real Salt Lake, and Scranton Wilkes/Barre RailRiders. He has made a good name for himself in the sports industry.

David’s successful career is not only because of his hard work but also due to the endless support of his family and loved ones. Among them, his spouse, Allison Blitzer, can also take the credit. In all these years of being married, the couple has been leading a blissful marital life by each other’s side. But many are unaware of who she is.

Hence, we present you this article about David S. Blitzer’s wife and her whereabouts.

Went To The Same College

The managing partner of multiple sports teams, David is happily married to Allison. The duo has been married for many years, but their wedding details remain a mystery. Just like him, David S. Blitzer’s spouse, Allison Ross, also attended the University of Pennsylvania. So, is it possible that the duo met at college?

All in all, David and Allison must be enjoying their marital bliss away from the limelight. It must have been an incredible journey for the couple. Nonetheless, we hope to learn more details about the duo’s marital life in the coming days.

A Doting Mom Of Five Children

The Blitzer pair have welcomed five kids in all these years of being married. David S. Blitzer’s wife gave birth to their children, Layla Blitzer, Jake Blitzer, Michael Blitzer, Annabel Blitzer, aka Annie Blitzer, and another child whose name has not been revealed. Likewise, the couple has kept their babies away from the limelight.

Furthermore, information regarding when the kids were born is not known. But as per one of Layla’s TikTok, she is the middle child. All in all, David S. Blitzer’s children seem to be doing well. The family of seven resides in New York City. Hopefully, more information about them will surface in the media in the coming days.

Mrs. Blitzer worked at Willkie Farr & Gallagher as a litigator from 1994 to 2001. David S. Blitzer’s spouse is also committed to several organizations supporting youth development. She serves as Chair of the Devils Youth Foundation. Likewise, she is also a board member of the Uncommon Schools and Project Morry.

These organizations provide a youth development program, which includes summer camp and year-round academic mentoring for young people coming from under-resourced communities. She is also a board member of the University of Pennsylvania’s Graduate School of Education and Penn’s Trustee’s Council for Penn Women.

Has An Estranged Relationship With Her Father

In August 2008, Allison Blitzer’s father, Stuart Ross, was charged with trying to shake her hubby down for $11 million. He allegedly threatened the couple and demanded a multimillion-dollar payment to stop harassing him. Allison’s husband met with Ross and Stuart’s lawyer, Stuart Jackson, and they agreed on a $400K settlement.

David paid Ross a $50,000 check as part of the agreement to get him to stop harassing him. Later, Ross and Jackson were arrested in a sting operation conducted. They tried to extort as much as $11 million from the businessman. Here’s the detail of the story.

In December 2007, Mr. Ross contacted Blitzer to ask him for money to start a business venture. Upon repeated requests, he gave him $65K and said he would not give him any more money. Allison Blitzer’s husband filed a civil suit in which he accused her dad of stealing $195K from him. It also said about the father and daughter’s estranged relationship since 2002.

Not only that, but the suit also mentioned that when Allison was pregnant, her father hoped the kid would die and that her gravestone would be carved with obscenity. It also mentioned his lousy business. David S. Blitzer’s father-in-law had a successful business career importing the Smurfs cartoon characters from Belgium to the U.S. but lost his money because of the bad decisions he made.

From there, Ross continued harassing his daughter and son-in-law with phone calls, emails, and threats of destroying David’s career. Well, the lawsuit might have been solved. Her father and his lawyer were to face up to seven years in prison. But it is not known what the judge decided.

All in all, David S. Blitzer’s wife must be doing good. A loving spouse and a doting mother, Allison must be handling her responsibilities gracefully. We look forward to learning more about her in the coming days.