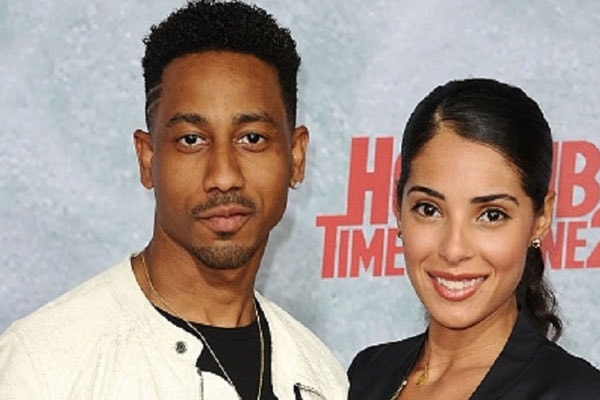 Brandon T. Jackosn who was born to religious parents is neither married nor single. But he is in a live-in relationship with his girlfriend, Denise Xavier who share a deep love between them. The actor’s past relationships aren’t revealed yet but he is a father to a daughter who is anonymous to the public.

Regarding Brandon T. Jackson’s girlfriend Denise Xavier, she is yet to share her details and private life. Till date, there is no news about them getting married or engaged. Whatsoever, the lovers are enjoying each other’s company and have often appeared together on the award shows. Unlike other celebs,  Denise keeps her things personal.

Denise doesn’t make many public appearances, neither she comes in interviews regarding her relationship with Brandon. But she has been often spotted with Brandon T. Jackson on numerous occasions hinting us that they are going strong. To some extent, we came to know that Denise Xavier is a Dental Hygienist who is the soon-to-be wife of rapper, Brandon T. Jackson.

The couple once came into the limelight while shooting for the episode of Living With Funny in which Denise has shared some of the challenges living with comedian boyfriend, Brandon T.

Since the couple has been together for quite a long time, it’s a bit surprising that they aren’t married. However, the couple has their own beliefs and reasons to stay as usual. Brandon explained in an interview that his child was God’s will and it’s the same thing for his marriage as well. The actor shared that they have to wait for God’s will to plan for the wedding. It looks like Denise Xavier is waiting for the perfect time.

Despite the bound, they are living in, the couple is happy with each other as usual. After all, marriage is just an occasion which is made by social rules and what more important is love and understanding between each other. It seems to be the secret of Brandon and Denise’s relationship that keeps them secure and lasting. We hope to see them getting married soon.