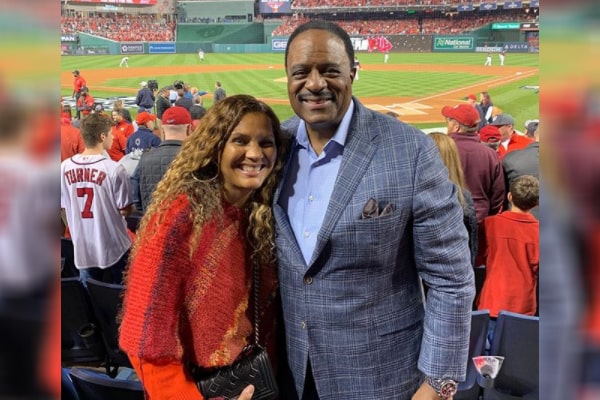 James Talmadge Brown, professionally known as James Brown and commonly called ‘J.B.,’ is an American sportscaster. He is known for being the studio host of The James Brown Show, Thursday Night Football on CBS Sports and NFL Network. Despite having a background as a basketball player, he is known for serving as a former host of Fox Sports’ NFL pregame show, Fox NFL Sunday, for a little over a decade.

Besides having a thriving career as a sportscaster, Brown is a righteous husband to Dorothy Brown and a loving father to Katrina Walker. The pair have been together for decades. Therefore, we are about to go on a detailed road to James Brown’s wife, Dorothy Brown.

Well, to keep things straight, James Brown’s wife is a very private person. Therefore, not much about Dorothy’s lifestyle or her professional choices are out in the public.

However, Dorothy Brown is a vibrant woman with the brightest smile and extreme believer of Jesus. Furthermore, in an interview, she revealed that her entire life revolved around Jesus and getting to know him. She met her husband, James, in similar circumstances.

Moreover, James Brown’s spouse, Dorothy, accompanies him in Bible talks and several interviews. However, she is nowhere near any form of social media. Growing up in Germany, Dorothy always had faith in Lord and always knew he existed. She further pursued Lord’s words and changed her way of life completely surrendered to him.

Currently, James Brown’s partner and he himself are following God’s words and are living with more compassion. They further serve for several charities and spreading things they learned.

The Lovebirds Met On A Blind Date

Aforementioned, James Brown’s wife is a God-fearing woman. She has been following him throughout her life and continues to do so. Moreover, God became a vital part of her relationship with her husband, James.

While talking to Andrew Wommack, James Brown’s spouse revealed that they first met on a blind date. They met through a mutual friend, James’ former colleague on Channel 9, who worked as a producer. Dorothy further told that she didn’t know much of sports and had to look him up on tv before the blind date.

The pair took time before marrying as Brown’s partner was in New York studying, maintaining a long-distance relationship, and growing up on words. Eventually, the blessed day came, and the pair still shared the love for each other and the Lord.

Dorothy’s Husband Considered His Daughter Before Marrying Her

As mentioned above, Dorothy and James Brown were on a long-distance relationship for several years before getting married.

Additionally, James sought permission from his daughter, Katrina, before marrying Dorothy, and she agreed with it. Right after, the beautiful god-loving pair shared their vows in a private ceremony.

James Brown And Dorothy Brown Do Not Have Child Together

Despite sharing a love for more than three-decade, the Brown couple did not welcome their kid or not that we know of. James Brown’s daughter, Katrina Walker, is their only kid and seems to have a healthy relationship with her parents.

Brown’s daughter, Katrina, is very fond of her stepmother and often praises her presence in her life. Furthermore, they even share their birthdays, and hence James often wishes them, appreciating the warrior woman of his life.

Katrina’s biological mother, Alfreda Holmes, is well-loved and cherished alongside her stepmom. As of now, James Brown’s daughter has fully grown up to start her own family of six. Furthermore, she is the one to break the news about Dorothy’s absence on social media and assured we’d never see her on one of her Instagram posts.

Well, James Brown’s wife is an awesome woman with a bright aura and beautiful charm. Although Dorothy did not birth any kids, she loves Brown’s daughter as her own.

Let’s hope we will hear more of Dorothy Brown in the future as she remains healthy and smiling.