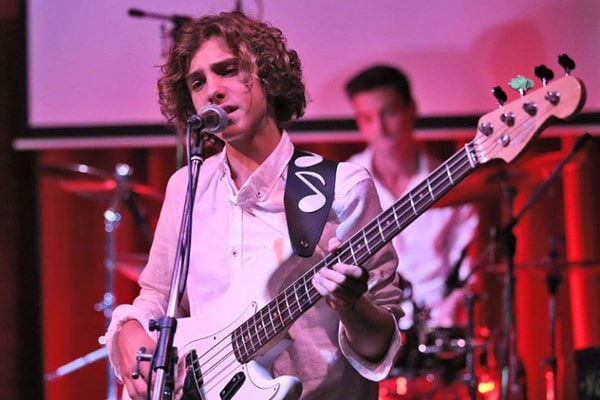 Maddie Ziegler is a household name since her appearance in Sia’s music videos. She has been on screen since very young via reality show, Dance Moms. Today, she has grown up beautifully and is shocking the world with her cuddly pictures with her new boyfriend.

The former Dance Mom star was hushed about her relationship until March 2020. But she dropped a bomb photo of her boyfriend, which became the talk of the town. Therefore, here are five facts about Maddie Ziegler’s boyfriend, Eddie Benjamin.

Benjamin Is Not As Famous As His Partner, Maddie

Maddie Ziegler is a household name and has earned fame since childhood. However, her boyfriend is not as famous as Maddie. Born on January 16, 2002, the 18-year-old, Eddie Benjamin grew up in Sydney, Australia. But, with time, he moved to LA to pursue a career in music.

Furthermore, the aspiring singer, song-writer, is trying his best to relish his musical talent to the world. He even created a rhythm track out of Sia’s snore back in 2019. Maddie Ziegler‘s partner rose to fame after she posted a picture of them together on March 16, 2020.

The Instagram post reached close to 2 million likes within a matter of days. Although Benjamin is not as famous as his partner, he is a talented young artist. Likewise, he even released his first debut single, “F**k My Friends” in April 2020.

Maddie Ziegler’s Boyfriend Used To Be A Part Of Band

Before fame, Maddie Ziegler’s boyfriend was associated with a teen band called ‘Haze Trio.’ Eddie Benjamin was a vocalist and played bass. Furthermore, the band was formed in Australia in 2015. The blue band consisted of three members, Eddie, Tash Wolf on guitar, and vocalist while Indy Linzbichler on drums.

Likewise, they were Balmain Blitz 2015 winners and Youthrock winners in 2016. Furthermore, they were stocked to perform to an audience of over 20,000 in Purple Rain. Unfortunately, it looks like the band’s progression is halted since Benjamin moved to the US to pursue his solo career.

It is not known when and how Maddie Ziegler and Eddie Benjamin met one another. But according to Daily Mail, the couple was first spotted in December 2019. The pair were shopping together in the Beverly Hills area and the gorgeous Maddie was spotted locking hands with the Aussie musician.

Maddie and Eddie were first spotted in December. However, speculations are that they could have known one other since June when Sia released a track titled Lullaby on YouTube. But they are together now officially and quarantined together.

Nothing seems to be fun when parents approve of the relationship. And Maddie Ziegler’s relation appears to be approved by Ziegler’s mother, Melissa Gisoni. When the couple first posted a picture of them together, Maddie’s mom commented, supporting their pair.

She defended the couple when some comments saw Eddie’s shirtless picture. Thus, they should be enjoying their relationship to the fullest. Leap! star, Maddie Ziegler has decided to keep their relationship private despite having her mother’s approval.

It looks like Maddie learned from her exclusive relationship with a fellow influencer, Jack Kelly, The couple dated for two years and were extremely open about their courtship. Thus, Maddie Ziegler’s decision to keep her personal life private is understandable and plausible.

Despite maintaining a secret relationship, both Maddie and her partner, Eddie, are influential and popular on social media platforms. Garnering over 13.6 million followers, Maddie is of a significant level while her boyfriend is reaching on it as well.

Maddie Ziegler’s boyfriend, Eddie Benjamin’s Insta followers, is increasing gradually and cherishes 379k followers by now. He posts musical notes and covers of his favorite songs. Now that the number of followers is hiking, Benjamin’s solo career as a musician might grow significantly.

Although Maddie Ziegler and her man, Eddie, are young, they are both hustling to pave their path to become successful. Let’s hope they both help one another to grow and motivate one another to walk on the journey fearlessly.