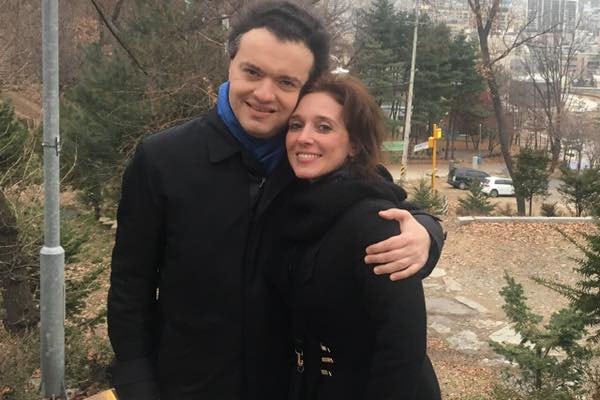 Evgeny Kissin‘s wife, Karina Arzumanova, was born in Moscow, Russia. Karina is the childhood friend of the genius classical pianist, Evgeny. The lovely duo married in 2017.

Karina Arzumanova is of Armenian Descent. She currently lives in Prague, the Czech Republic with husband Evgeny Kissin. Moreover, she is the mother of four children from her previous relationship. She has one daughter, Marianna Arzumanova, and three boys.

Karina Arzumanova is a former lecturer at Lomonosov Moscow State University, the highest-ranked university in Russia. It is a co-educational and public research university located in Moscow, Russia.  According to QS World Universities Ranking 2019, the University was placed on the top 90th position among other top universities. Besides, Karina taught there from 1996 till 2002.

The gorgeous Karina Arzumanova attended the University of Göttingen in Germany. It is one of the internationally renowned research university. After graduating from there, she attended Lomonosov Moscow State University, another reputed institution. Besides, she later became a lecturer there for 6 years. Moreover, the former lecturer can also speak four different languages – Russian, English, Deutsche Sprache, and Czech language.

Not much information has been out in the public about Karina. She uses Facebook frequently and has uploaded quite a number of pictures of places she’s been to. From her Facebook feed, we believe Karina has quite a passion for photography as well. Karina also uses popular social media networking site, Instagram but only has 14 posts so far.

She is also a doting mother of four gorgeous kids. Her daughter, Marianna Arzumanova has clearly got the looks from her!

Although friends since the early days, Evgeny and Karina didn’t marry until 2017. Arzumanova wedded the genius classical pianist Evgeny Kissin, on March 10 in Prague. The duo tied the knot in front of their family and friends. We wish the couple a very happy life ahead!

Who Is Jennifer Aydin’s Husband? Look Into Their Love Life

Take A Look Into Actor Burn Gorman’s Family. He Is A Married Man And Has Three Children

Jacksepticeye Net Worth – What Are The Sources Of Earnings Of The Irish YouTuber?

Where Is Donnie Yen’s Ex-wife Zing-Ci Leung Now? Were Married For Two Years