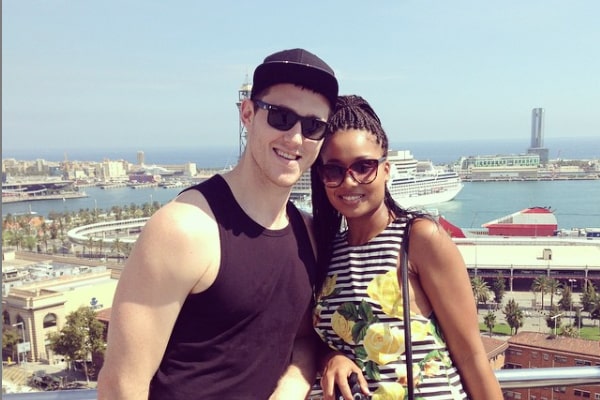 Aron Baynes is an Australian professional basketball player for the Phoenix Suns. Starting his professional career with San Antonio Spurs in 2013, Baynes has made remarkable contributions to the teams he has played with.

As of now, Aron Baynes is enjoying a successful career in NBA and is settled with wife Rachel Adekponya by 30s. Although Baynes seems to be a secretive person, we have attempted to find more about his wife. Here are a few facts about Aron Baynes’ wife, Rachel Adekponya.

Human nature is extremely indecisive. One prefers the limelight while the other goes through the high and lows to bury it. The latter one is Aron Baynes’ wife, Rachel Adekponya.

The Australian basketball player, Aron, has secretive nature, and so does Rachel. There is almost nothing about the 6’10” tall NBA player’s wife. However, we do know that Bayens’ wife, Rachel’s brother, is also a professional player, Matthew Adekponya.

Although Adekponya’s details are grounded, she seems to be a feisty young woman and mother of two.

Aforementioned, both Aron and Rachel are pretty secretive. Likewise was their relationship. Although Aron shares pictures of his wife and children on his Facebook and Instagram, he has kept most of their relationship details under wrap.

While going through Aron Baynes’ Instagram, we can see that he started posting their pictures since 2013. However, they might have been dating prior to that as well.

Despite spending a considerable portion of lives together, they are still passionate about one another and equally prioritize one another. Baynes’ partner, Rachel, gave birth to two children in 2016 and 2018. Bayens’ eldest son is named Marson Baynes while their young daughter’s name is not exclusive yet.

Rachel’s husband, Baynes, is very focused on his career but always makes time for the family. The family of four travels and collects memories with and without their little ones.

In the world of soaring prosperity, people are clenching their fists and gritting their teeth in fear and search for equality. Such is the situation of Black people in the present context.

After the brutal murder of George Floyd, the entire world has come together chanting for justice and equality. Among the millions are Aron Baynes and his wife, Rachel Adekponya.

Since the couple is a combination of two races and gave birth to their two adorable children, papa Baynes was forced to be vocal and wrote an open letter to the world. He started by telling the world that his spouse is a black woman and further wrote about understanding the fear, anger, and resilience for the fight for impartiality.

Baynes mentioned that he was a silent bystander and did not have the knowledge or will to speak for those who were vulnerable. He further confessed about being oblivion to the oppression, but people judging his children or any children based on their skin breaks his heart.

Australian NBA star, Baynes, and his wife, Rachel, believe that education starts from home, and thus children must not learn to pass judgment on people of color or their background.

The Baynes couple is very much in love with one another putting family forth everything. Let’s hope they manage to raise conscious humans in the future.