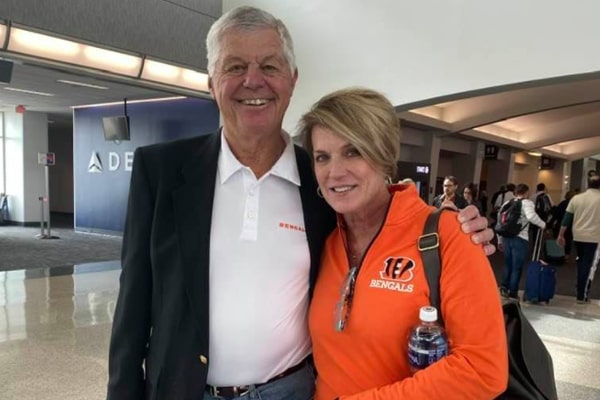 Ken Anderson is a proud father of three adult children and a loving husband to beautiful belle, Cristy Anderson.

Ken Anderson may be a common name for quarterback fans, especially one with outstanding records denied Hall of Fame since the very beginning. The former NFL player, Anderson spent his entire professional career playing for the Cincinnati Bengals and later returned as a  coach. Throughout his days, he had an impressive career record of 32,838 passing yards, 197 touchdowns, and has won an MVP.

Similarly, Anderson was a three-time All-Pro, and led the NFL in passer rating four times, went to four Pro Bowls, and led the league in completion percentage three times. Well, the impressive achievements make him be one of the top players in the NFL, but the denial of the Hall of Fame has been a hot topic since forever. Despite that, Ken Anderson lives a serene life with his beautiful wife of decades, Cristy, and children.

Here we will be learning more about the beautiful human and former NFL player, Ken Anderson’s children and wife. Thus, brace yourself.

Aforementioned, Ken Anderson has been making several headlines for several years because he is oddly skipped over Hall of Fame. Whether or not Anderson is legible for the Hall of Fame, you sure can crown him as a loyal husband.

Former NFL player, Ken has been married to Cristy Anderson for several decades. Unfortunately, no records of their marriage date are given away, but Ken  Anderson’s wife has been a firm support system for the NFL legend.

In retrospect, Ken Anderson’s partner, Cristy, was a flight attendant at Delta Airlines. The lovebirds are still in love after a decade-long marriage. Although Ken is not present on Facebook, Mrs. Anderson often posts their pictures together. Moreover, their passion further blossoms beautifully.

Father Of Two Daughters And A Son

The Anderson couple is very grounded and has kept most of its information confidential. Furthermore, Anderson’s children grew up secluded from the media scrutiny. Moreover, Anderson’s son, Matt, and daughter, Molly, are away from social media for the most part.

Among Anderson’s children, his daughter, Megan Anderson, is the only person exposed to the media and has pursued a career behind cameras. According to Megan Anderson’s LinkedIn, she has been working as an associate producer for ESPN since 2008.

Furthermore, Ken Anderson’s daughter, Megan, worked in E:60 as a producer and served a phenomenal movie. There may be several contributions to Megan as a producer, but she chose to remain silent about her achievements. Despite having a star father, she has maintained her grounded personality.

Similarly, the Norte Dame Academy graduate, Megan, majored in radio and tv production at Kentucky University. Sadly, she too seems to be away from social media and occasionally appears via her mother’s Facebook along with her siblings anonymously.

Let’s hope to see more of Ken Anderson’s children in the coming days.

Besides having a successful marriage, Ken Anderson and Cristy Anderson are a philanthropic couple. They launched an organization dedicated to helping people/children diagnosed with autism.

The couple launched The Ken Anderson Foundation in 2014 as they witness one of their nephews, Drew, struggle with autism. Hence, they began the organization to create solutions to the expanding need.

Ken Anderson and his spouse have been rigorously working with the organization to collaborate with several other similar goal-oriented organizations.

There are many Ken Andersons involved in sports and are equally successful. However, we are talking about the former NFL player, Ken Anderson, who spent sixteen years playing for the Cincinnati Bengal. He earned several titles, and even after retiring, he chose to remain as a coach.

Noted for never taking credit for a win and praising his teammates for their victory, Anderson re-joined the team in 1993 as quarterback coach after serving as a color analyst for the Bengals’ radio broadcasts. Currently, he is living with his soulmate, Cristy, in Palmetto Hall Plantation.

According to Local Life, the couple occasionally goes out on a date, but Anderson’s wife prefers to cook, and he does the grilling. Furthermore, Anderson’s children are married and gifted Anderson couple with a battalion of grandchildren.

Let’s hope the Anderson couple spend their retirement with great enthusiasm and wish to see more of Anderson’s kid in the future.

The name Molly means a sea of bitterness”, “rebelliousness” and “wished for child” or “beloved” and has English origin.

Likewise, Megan means Pearl and is of Welsh origin. Similarly, Matt is of Hebrew origin which means the gift of God.