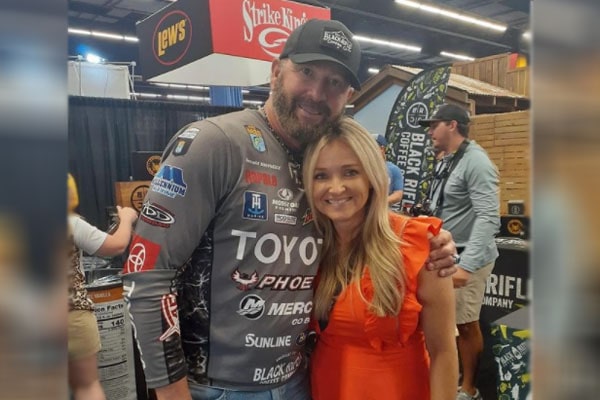 LeAnn Swindle is the wife of the professional bass angler Gerald Swindle, whom she married on May 8, 2004. She met Gerald at a local bank in Alabama, where she worked as a manager. Eventually, the duo fell in love and married some times later.

Nicknamed Lulu by Gerald during the start of their relationship, LeAnn is now the center nucleus of Gerald’s home. She is managing his household as well as his profession ever since their marriage.

Here, let’s be acquainted with Gerald Swindle’s wife, LeAnn Swindle, including their marital life and their children.

One Of The Biggest Supporters Of Her Husband

As you grow and become successful, you’ll probably need a support system to help you manage all of your personal and professional life at once. For Gerald Swindle, the support system is his beloved wife, LeAnn Swindle, who he says is also one of his biggest mentors and fans in his multiple media interviews.

According to Gerald Swindle, his parents were huge supporters of what he was doing while growing up. His fishing and hunting addict dad, Tommy Swindle, liked to see him fish and hunt. Gerald Swindle’s father also taught him about the outdoors. But, once he met the love of his life, LeAnn, she became his biggest mentor. She presses him and challenges him to get better and become a better angler.

Gerald Swindle’s wife, LeAnn Swindle, is constantly pushing her husband to be and do his best ever since they are together. She celebrates, cries, and goes through every tough and good time together with her significant other, Gerald, aka G-Man. No matter how bad things are, the duo has one another’s back.

Well, Gerald must be proud to have LeAnn as his life partner as well as his best friend and mentor.

Mrs. Swindle Is Also Good At Hunting And Fishing

Many might be unaware of the fact that Gerald Swindle’s wife, LeAnn Swindle, herself, is also an angler. Despite growing up near two of the best bass fishing lakes in Alabama, Mrs. Swindle didn’t truly embrace an outdoor lifestyle at first. She started enjoying fishing and hunting only after marrying the award-winning angler, Gerald.

Ever since tieing her marital knot with Gerald Swindle, LeAnn stays step for step with her man, whether it’s in a treestand or on a bass boat. Her husband of sixteen plus years taught her almost everything she did not know about the outdoors. But, she stills feels like she is learning at the present date also.

Although LeAnn does not have any professional achievements like her husband to her name, she had participated in some fishing tournaments in the past. To date, she has caught many largemouth basses and other similar fishes topping 12 pounds. Moreover, Lulu is also great at hunting deers and ducks. Though she likes shooting a rifle, bow hunting is by far her favorite.

LeAnn shot her first deer – a 6-point cull buck, on a property her husband once leased near small South Alabama. While she and her friend were leading the deer onto their utility vehicle, her thumb got lodged in the vehicle’s tailgate. It badly broke her thumb’s bone, due to which her friends rushed her to the emergency room on Christmas Eve. LeAnn has many other scars of bruises and wounds to prove that she struggled a lot to learn to hunt and fish somehow, like her outdoor game expert husband, Gerald.

Gerald Swindle and his loving wife, LeAnn Swindle, have a daughter named Whitney Donaldson. Though the pair has not opened up much about their girl in public, it looks like they welcomed her long before their marriage. Growing up, she attended a nursing school and graduated from there in 2017. So, their daughter is a registered nurse now.

Currently, Gerald Swindle’s daughter with LeAnn Swindle, Whitney, is a married woman and a doting mother to two kids, a daughter, and a son. All of LeAnn’s daughter, son-in-law, and grandkids also join her and Gerald for fishing, hiking, and camping during their free times to boost their mood.

Pro-angler Gerald Swindle’s beau, LeAnn Swindle, is his business manager and his marketing director. Plus, she is also his accountant, his chauffeur, and manages everything for him. It was quite hard for the former bank manager, LeAnn, to manage her husband’s business initially, but slowly, she got habitual.

And, now, she is the one who handles everything related to her significant other very well.

The former banker, LeAnn Swindle, took a sabbatical from work to stay home, to help her daughter go to school, and be there when Gerald was home back from his work. But, later, the Swindle couple decided it would be best for her not to go back to the bank. So, she immediately started learning about her husband’s business. It’s because it was a major change for her from what she used to.

For the first couple of years, LeAnn ran all the business from home before traveling with her partner and working with him in the office. And slowly, she started building a relationship with her husband’s sponsors, handling his business, and managing contracts. And, at present, she is great at her job as her husband’s overall manager.

For over sixteen years, LeAnn probably has been more of an asset for Gerald’s sponsors than him. She handles everything related to him, like booking plane tickets and getting it all done. Gerald Swindle’s sponsors really appreciate that somebody is very attentive to all the detail. And, LeAnn enjoys getting such positive comments from Gerald’s sponsors. She feels great about doing the same thing her partner enjoys doing. It must be one of the reasons behind their successful marriage.

So, LeAnn Swindle is not just the wife of Gerald Swindle but, she is also a great mom of his daughter, his business partner, and his biggest mentor. We hope their bonding remains as strong as it is now till their last.