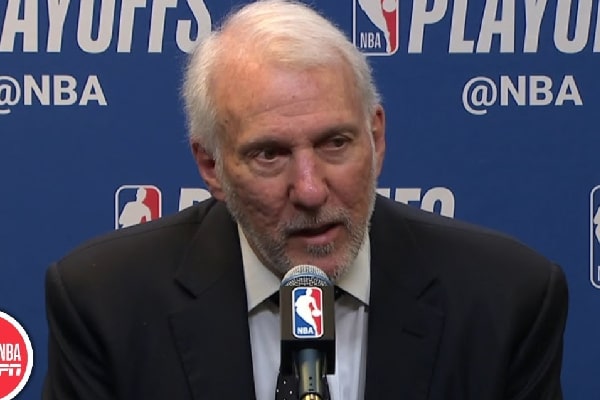 Gregg Popovich, one of the most celebrated names in NBA history, is a whole package. Packed with exceptional tactics and a person who served the nation, Gregg is the perfect person to exhibit leadership both in and outside the court.

‘Coach Pop’ aka ‘Pop,’ Gregg has several reasons to celebrate his life, including his records of most NBA history wins. Furthermore, he celebrated his love with his wife, Erin Popovich, for several decades before leaving him behind to experience on his own. The wonderful soul of Popovich’s wife left the world in 2018.

Therefore, we shall be talking about the only woman beside Gregg in his highs, lows and could call him out for his sarcasm. Let’s get to know more of Gregg Popovich’s wife, Erin Popovich, from this point on.

Although there isn’t much on Erin Popovich’s childhood, she was accompanied by her siblings. According to Find A Grave, Erin Popovich’s mother, Jeanne, gave birth to 3 girls and four boys, including Erin. However, we could only find Erin’s brother Daniel Joseph Conboy who died on July 3, 2020, at age 73.

Sadly, Gregg Popovich’s wife, Erin’s life is preferred to live privately. Therefore, not much about her is revealed on the Internet. Despite that, she took pride in being a part of the Spurs family and a loving wife of Coach Pop, known for his savagery.

Married For Over Four Decades

Gregg Popovich’s truthful manner is known to the world, but his life-partner, Erin Popovich, might be the only person who would call him out for being too crude or savage.

The former couple shared their vows on October 10, 1976. Furthermore, they first met at the Air Force Academy in the 1970s. Gregg was an assistant coach for the Falcons at the time.

Since then, Erin and Gregg formed a sincere friendship and marriage. She often stayed away from the media’s approach, letting her husband, Gregg’s success shine. However, we do know that Erin often corrected his rude behavior towards reporters. She’d call him out for handling the situation immaturely and ask him to remain cool-headed. Guess a wife must keep her husband’s manner in check!

Throughout the decades-long marriage, the former love-birds welcomed two Popovich, a son and a daughter, who mostly stayed away from the media. Their first kid, Micky Popovich, lives an insane private life while their daughter, Jill Popovich, occasionally appears on interviews.

The Popovich couple were true to their vows as Gregg loved her in sickness and in health. Furthermore, Erin kept her promise of loving him till she breathed her last, as she departed as Gregg Popovich’s wife on April 18, 2020

Well, death is liberation and a painful experience for those who must live with memories. It’s more painful to see a loved one’s immovable body and yearn for their presence. But that’s what life is, and that’s how Gregg Popovich is living too.

Aforementioned, Gregg and Erin were married for four decades and were best friends. However, Erin passed away on April 18, 2020, after battling interstitial lung disease for decades.

Was A Humble Soul

San Antonio Spur’s coach, Gregg Popovich’s wife, Erin Popovich, was the humblest soul. She would help anyone in need and spent most of her spare time on charity works.

Furthermore, Erin Popovich’s daughter, Jill Popovich, confessed that she’d be on top of the spectrum of helping people. She further detailed Erin’s concern with how people would manage to afford their medications. Erin insisted on her daughter to reach out to other ILD sufferers.

In that sense, the Popovich family is exceptionally motivated to carry her legacy through endowment and help other sufferers. Hence, Erin’s Endowment started. Nothing sounds as good as giving back to the world like Gregg Popovich’s wife does.

Aforementioned, Erin continues to look after people’s needs. After living with interstitial lung disease for decades, she would get concerned about how people would manage to afford their medication and therapy sessions. Therefore, the Popovich family started Erin’s Endowment.

Although Gregg Popovich’s wife, Erin Popovich’s death, brought immense pain to the family, they were determined to continue her wishes to help patients in need. Furthermore, Erin’s pulmonologist, Dr. Jairo Melo, revealed that hearing the sad news made people donate in her name, and thus, they contacted Chest Foundation.

Witnessing Erin live with ILD for decades taught the Popovich family what other patients need to face the diagnosis. Hence, through the endowment, patients and caregivers will have access to resources and support efficiently.

As of now, Erin Popovich’s soul rests easily while her family is extremely motivated to help those in need. Survived by the legendary coach, Gregg, and their two kids, she will forever remain the bravest and kindest person.