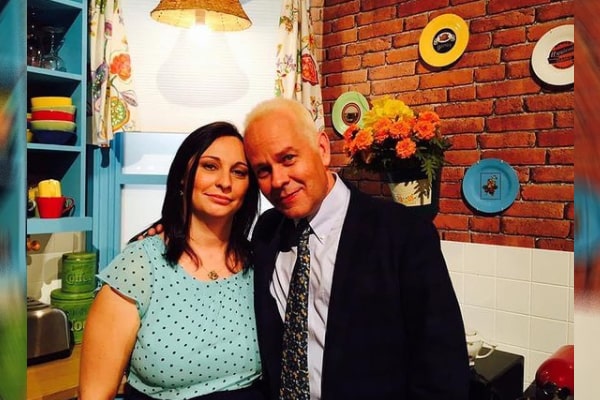 James Michael Tyler and Jennifer Carno are in show business and have many common interests. Image Source: James Michael's Instagram.

GUNTHER HAS A NAME? Apparently, YES! James Michael Tyler. Also, he was not just a goofy-looking barista but an intellect with a degree in Geology and a Masters in Fine Arts in Acting from the University of Georgia. Additionally, Tyler was quite good-looking and was a committed partner to his wife, Jennifer Carno.

Wildly known for F.R.I.E.N.D.S, James Michael also appeared in several movies and television series. But that’s the story for another time. Here, we shall discuss his partner, Jennifer Carno. Did you know James Michael Tyler’s wife, Carno, did not know her then-boyfriend was famous? Well, tail until the end of these word trails to learn more about the beautiful couple and their romance.

Like James Michael Tyler, his wife, Jennifer Carno, is also in the show business, specifically in the creative department and off-camera.

According to Jennifer Carno’s IMDb, she has worked in multiple films in different roles, primarily as a script coordinator and production assistant.

Furthermore, Jennifer has eight credits in the script and continuity department. Some of the movies and series she has worked on are Mongo Wrestling Alliance, Out of Jimmy’s Head, Lipshitz Saves the World, Pirates of the Caribbean: At World’s End, Sixty Minute Man, You, Me and Dupree, etc.

Similarly, Carno also served as an assistant writer in Accepted and has a writing credit for an episode of The Beachbuds. Moreover, James Tyler‘s sweetheart, Jennifer, also worked as a casting assistant for Trailer Trash in 2007.

Although Jennifer Carno rose to fame as James Tyler’s spouse, she is talented and is currently involved in Magpie Funeral as a script consultant. Unfortunately, she is a private person, and thus, there are no details about her whereabouts or professional leads.

Furthermore, Carno’s Instagram is private with 500 posts, and 625 followers & her Facebook is silent. Thus, it shows that Mrs. Jennifer Carno prefers to keep her life confidential. However, the pair seems to travel a lot and have many common interests.

Well, did you know Carno did not know her husband was famous?

The former FRIENDS star, James Michael Tyler, preferred to keep his life low-key. Therefore, we do not know many details about his second marriage with Jennifer Carno. The Tyler couple kept their romance and marriage details under wraps but never hesitated to appear at events together. Thus, could James and Jennifer be ruled as a ‘selectively private couple?’

While talking to Express in 2019, James revealed that his wife never watched the sitcom when they started dating. Although he starred as Gunther in the decade-long sitcom on NBC, he was rather thankful that Jennifer did not marry into the Gunther fame.

Moreover, James added when his spouse told her best friend about their relationship; her friends noted his role. On the other hand, Jennifer was startled and added she didn’t watch it. James and his partner watched the show together as he did not watch the full show despite bleaching his hair throughout the ten seasons.

As stated earlier, the Tyler couple was private and kept their lives away from the media. However, James shared pictures of the two spendings time while Jennifer keeps her profile secret. Hence, we wouldn’t know if the pair welcomed any kids together.

James was previously married to Barbara Chadsey and filed for divorce after nearly a decade of their initial separation.

Furthermore, James Michael Tyler’s wife, Jennifer Carno, is a talented and happy person. Thus, we hope to hear more from her in the coming days.

During the highly anticipated Friends reunion, fans realized that James Michael Tyler who played Gunther was nowhere in sight. While he did appear via Zoom, many were wondering why he was not present physically. Well, the reason behind this is James’ poor health.

In an interview with Today, Jennifer Carno’s spouse, James revealed that he was diagnosed with stage 4 prostate cancer in 2018. He went through hormone therapy and the disease was under control. However, during the pandemic, his tumors started mutating and spread to his bones and spine.

Actor James Michael Tyler (@slate_michael) played Gunther on “Friends” for 10 years, but he was unable to attend the recent cast reunion in person because he’s been battling a serious health issue. Now he’s sharing his news for the first time with @craigmelvin. pic.twitter.com/272tg4Sbvc

Tyler’s lower body was paralyzed and he was going through aggressive chemotherapy. Sadly after a lengthy and taxing battle, James Michael Tyler lost his fight with the disease. The man best recognized as Gunther reportedly died peacefully at his home on October 24, 2021.

James’ Friends co-stars Jennifer Aniston and Courteney Cox took to their respective Instagram pages to pay tribute to the late actor. Many fans have also shared their brief through social media regarding the devasting news.