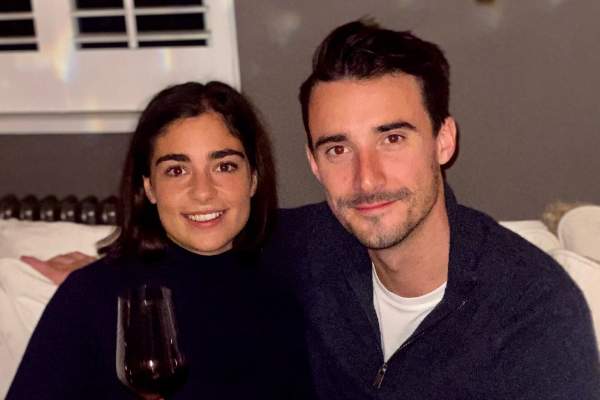 Jamie Laura Chadwick, simply known as Jamie Chadwick, is a British racing driver currently racing in the 2022 W Series for Jenner Racing. She was the winner of the inaugural W Series in 2019 and successfully defended her title in 2021. Also, she is the record holder for the most wins, podiums, pole positions, and points in the W Series at present.

In addition to being a renowned race car driver, the 24-year-old is in a blissful romantic relationship with her partner, Struan Moore. However, many might not know much about her lover and want to know about him. Hence, we will learn more about Jamie Chadwick’s boyfriend in this article.

Is A Former Racing Driver

Struan Moore was born on December 13, 1995, in Jersey, Channel Islands. He went to Victoria College, a day school for boys in Saint Helier, Jersey, where he studied Psychology, Design, and Business, from 2006 to 2012. As the title suggests, Jamie Chadwick’s partner was also a professional racing driver like her.

According to his interview with Paddock Magazine, Moore began playing around on rental karts as a very young kid when he was roughly about seven years old. However, his first-ever experience of competing in a race was in karting at the club level when he was eight.

Soon after, Struan started competing in British Formula 4 and Japanese Formula 3. In his career as a racer, he has also won numerous races, including the 2018 British GT Sliver Cup Champion. Aside from that, he competed in the British GT Championship, Asian Le Mans Series, LMP2, etc.

Furthermore, the British race driver ranked fifth in the 2018 Total 24 Hours of Spa in the Silver Cup class. Additionally, he drove for McLaren GT as part of the driver academy in 2016. However, Struan hasn’t competed in any race since 2019. So, could it be he has put his racing days behind?

As mentioned above, Struan hasn’t raced since the late 2010s, so what is he doing now? Well, Moore is still involved in the racing world as he has held many jobs behind the scenes. He first worked as a driver coach for almost three years at Peak Performance Management, from January 2019 to November 2021. He also founded his own racing team, Struan Moore Racing, and served as their director.

Currently, the 26-year-old works as a driver manager at Infinity Sports Management, located in Silverstone, England. He has been working there for about seven months now, since January 2022. Jamie Chadwick’s boyfriend must have earned a significant amount from his job. Hence, Struan Moore’s net worth must also be a considerable sum.

Unfortunately, the story of how Jamie and Struan met and when they began dating has not been revealed yet. However, going through their social media posts, they first posted their photo in January 2021. So, could the lovebirds have started to date just then? Hopefully, they will disclose more details about their first encounter and dating timeline in the future.

Furthermore, Jamie Chadwick’s partner frequently posts pictures of her on his social media accounts. The same also goes for the W Series champ.

Moore has over 15.2K followers on his Instagram and over 1.1K on his Twitter. He also doesn’t shy away from sharing and expressing how much he is in love with his girlfriend to his followers. Moreover, the lovely pair also often go on vacations and travel together, and Jamie frequently shares photos of them going on bicycle rides.

Well, it seems like Jamie Chadwick’s boyfriend is leading a happy and successful life. He must be prospering well in his career as well. Nonetheless, we wish the adorable couple continue to enjoy a healthy relationship for a very long time.