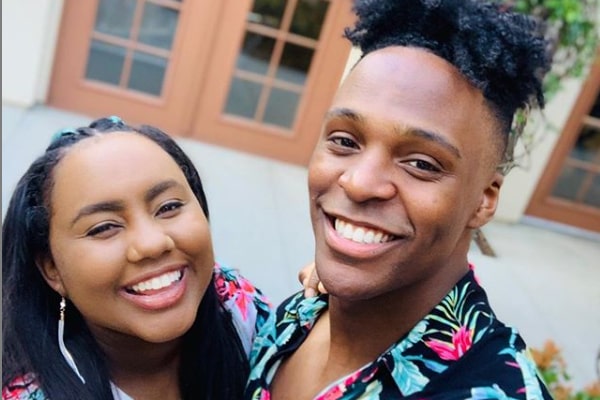 Jamie Grace's husband, Aaron Collins is an incredible father and a husband.

Jamie Grace is an American singer, rapper, and musician. Born on November 25, 1991, she was discovered via YouTube by TobyMac and signed her to his label, Gotee Records for two albums.

Jamie Grace’s career made a significant turn when her song ‘Hold Me‘ managed to book a nomination at the 2012 Grammys and won the 2012 Dove Award for New Artist of the Year. While enjoying a successful career, Jamie also cherishes her wonderful lovelife.

Jamie Grace’s partner is a wonderful man with a contagious smile, a stable career, and a healthy physique. Born and raised in St. Louis, Aaron seems to love outdoor games and gym. There isn’t much about Jamie Grace’s spouse, but his Instagram bio that he is a great man. There is not much detail about his work but one of his videos tell that he was the Chick-fil-A cow for almost 2 years

Although Aaron Collins has kept his information grounded, his wife, Jamie, often talks about it. He is a faithful person. In Grace’s own words, Aaron is kind, patient, hilarious, driven, and a fearless person who seeks to love God and people.

Despite being crunched on Jamie Grace’s husband’s details, we all know that the couple is living a blessed life.

The Grammy Award nominee, Jamie Grace, has been sharing her life with the world since she was 12 years old. She has been open about her Tourette syndrome diagnosis and other mental health issues.

Likewise, Grace has also graced the world with the couples’ sweet memories of their courtship and their fond memories. In several videos, Grace and Aaron have mentioned that the pair first met on an event where Jamie was present to perform.

Regrettably, both Grace and Aaron did not stay in touch with one another for less than a year, and Instagram happened. According to Jamie Grace’s beau, one blessed day, his to-be wife at the time decided to follow him on Instagram.

Aaron followed her back, and the couple began to have some casual talks. They talked for a few days, and then things started escalating when Jamie Grace’s husband decided to know her better and build a family together. Well, you can find plenty of information about the lovely married couple on their YouTube channel as well which has got over 27.3k subscribers..

The pair got along pretty well, and they celebrate their anniversary in Jamie Grace’s birthday.

If you have been following the ‘Holding On’ singer, Jamie Grace, you should know that she is all about marrying and building a home rather than date and waste time.

Jamie has made her dream come true, including the Billboard Music Award nominations at the age of 19, which made dating more challenging. However, meeting Aaron changed her life, and she seemed happier and focused.

There were times Jamie and Aaron faced complications in their relationship, but they overcame them all and finally got engaged in January 2018. The engagement was announced via Grace’s Instagram. Also, Grace’s partner, Aaron’s first Instagram post, happens to be their engagement announcement.

The contemporary Christian musician, Jamie Grace, and her boyfriend of 2 years, Aaron Collins, shared their vows on April 14, 2018. The beautiful wedding was held at North Metro Baptist Church in Lawrenceville, Georgia, amidst 1,500 friends, family, and fans.

After five months of courtship, they built an insanely beautiful bond; the holy couple decided to tie the knot. Because Jamie had spent the majority of her life sharing with the viewers, her fans were curious about the rush of marriage. To which Jamie replied, saying that she and Aaron fell in love and knew that they wanted to spend the rest of their life together.

Jamie further added that marrying soon made sense to them, and thus, they got married pretty early. They are getting along incredibly well and enjoying their marital life blissfully.

It looks like the relationship between Jamie and Aaron is running pretty swiftly. It was a huge surprise when she announced her engagement, but the shockwaves were no match when she dropped the news of her pregnancy.

The newlywed was pregnant quite soon after their marriage to which Jamie Grace said to be God’s timing. The couple welcomed their first baby, Isabella Brave Harper Collins, on June 7, 2019.

Born June 7, 2019 – her due date – at 9:27pm. Exactly 7 pounds, 20.5 inches and she’s every bit of lovely 👶🏽 With two middle names like her Southern mama and deep brown eyes like her charming dad, she is oh so loved more than she will ever know. pic.twitter.com/IPKxqtBKnM

Both Jamie and Aaron posts a lot of pictures of their baby on Instagram. Moreover, Jamie Grace’s baby also appears on her YouTube channel. Isabella even has her own Instagram and garners 21.8k followers at a very young age.

Let’s hope the family of three enjoys their time together and continue the excellent work and stable career. Furthermore, Both Grace’s husband and she loves kids and looks forward to having more kids in the future. Therefore, we can expect more babies in the coming days.