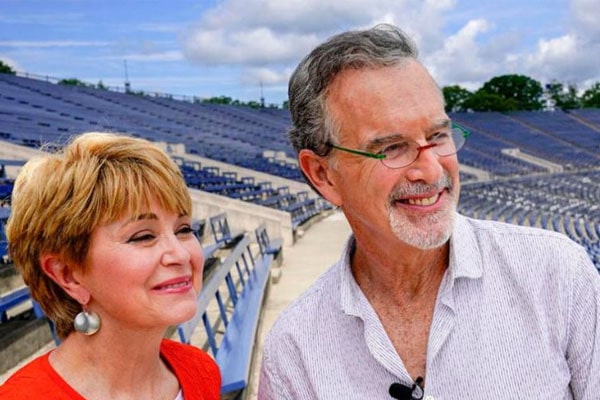 The lovely pair of Jane Pauley and Garry Trudeau have been married for more than 4 decades. Photo Source: CBS Sunday Morning.

Jane Pauley is an American television journalist active in reporting since 1972. She is famous for her 13-year tenure on NBC.’s Today program and 12 years as co-host of Dateline NBC. She is further applauded for acknowledging her struggle with bipolar disorder.

Besides having a thriving career for almost five decades, Pauley is in a blissful marriage with cartoonist Garry Trudeau. The couple has been together for nearly four decades and are parents to three beautiful kids.

Love is unprecedented until you find the only love of your life. Very few are blessed with unconditional love, and among them is journalist Jane Pauley and her husband, Garry Trudeau. They have been maintaining the same spark for ages.

Jane Pauley’s husband, Garry Trudeau, was introduced to her via a mutual friend and co-host Tom Brokaw in 1975. They had met shortly after Garry received the Pulitzer Prize for editorial cartooning. Interestingly, Garry Trudeau’s wife admitted that she didn’t know about him until they met though he was a big deal back in the day.

The Pauley-Trudeau couple built their relationship for five great years. They further got to know one another’s passion and created ways to balance their personalities. After five beautiful years, they were sure about spending the entire life together.

Aforementioned, Garry and Jane met via a mutual friend and dated for five years before walking down the aisle. They shared their vows on June 14, 1980, amidst friends and families without seeking much attention from the world.

From 1980 to date, Jane Pauley’s husband, Garry, still admires his gorgeous wife. They share remarkable friendships and have maintained love even after four decades of marriage.

While speaking about Pauley’s incredibly beautiful marriage, the 69-year-old confessed that she is eerily blessed in her life to have Garry. Furthermore, marriage is hard work since both individuals have to put an equal effort to maintain the balance in the relationship, all while being themselves.

More often or not, the world believes that true love is merely a concept. But the Pauley-Trudeau couple actively proves the world wrong.

Juggling Between Marriage and Profession

It is uncommon to see two people with entirely different professions come together and even interview each other. But Jane and Garry have managed to juggle between marriage and career perfectly.

Garry Trudeau’s wife, Jane, interviewed on his accidental career on CBS Sunday Morning in 2018. The couple traveled to Yale University, where ‘Doonesbury’ creator, Garry, started half a century ago, and he was only a 20 y/o student.

They chatted about Garry’s career and the shifting newspaper industry. Pauley did not know Garry Trudeau’s work until before she met him.

Well, the balance in Jane Pauley and Garry Trudeau’s marriage is magical. And the relationship gifted them with three wondrous kids, of whom we will be talking below.

Aforementioned, Garry and Jane have a beautiful marriage, perfectly blended personalities, and a balanced career. Furthermore, they are blessed with three talented kids who are all grown up today.

Jane Pauley’s daughter, Rachel Trudeau, was born in 1983 and worked as an associate specializing in banking and finance at the New York firm, Weil & Manges. Likewise, her son, Ross Trudeau, also born in 1983, serves as the director of digital media for Match Education. He also constructs crossword puzzles that are featured in N.Y. Times.

Similarly, the youngest in the family, Thomas Trudeau, was born in 1986, received M.B.A. from Yale. According to N.Y. Times, he was to become the manager for business development at Major League Baseball Advanced Media back in 2014.

Jane and Garry Trudeau’s children have all grown up and gifted their parents with cute grandchildren. Therefore, the decade’s long marriage started as a simple date and ended up becoming a life-long relationship.

Let’s hope the couple, Jane Pauley and Garry Trudeau, are enjoying their septuagenarian. Let’s hope they are grateful to have one another and enjoy many years together, healthier, and happier.