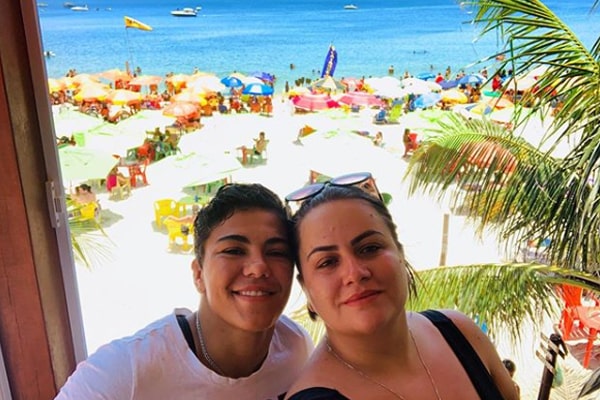 Jessica Andrade is a Brazilian mixed martial artist who is #1 in the UFC women’s strawweight rankings. The open lesbian martial artist is currently experiencing the prime of her career and is highly praised in the combat sports world.

Besides the fighting arena, Jessica Andrade equally focuses on her marriage with biologist Fernanda Gomes. The pair is a total eye candy and have been together for quite some time. Thus, here we will be talking about Jessica Andrade’s wife, Fernanda Gomes, and her whereabouts.

When the world fancies appearances, Jessica Andrade’s partner, Fernanda Gomes, fancies the world of biology. The definition and unique composition of living being seemed to fascinate the gorgeous beau of Jessica. At least that’s what Fernanda’s Instagram screams.

The beautiful brunette seems to be an open book but meticulously chooses about the portion of information she lets the world to have. Hence, Gomes’ Insta bio says ‘Bióloga.’

Furthermore, Andrade’s spouse used to share a lot about her University journey and take pride in her career choice. Born to Humberto Gomes and his wife, Fernanda also seems to have two sisters, Paula Sanchez and Patricia Gomes. They share a precious bond and love spending time together.

Likewise, Gomes is also very fond of Jiu-Jitsu. She practices along with her father and partner, Jessica. Moreover, she seems to love hair color as she turned from a brunette to brown to ginger to blonde to what now!

Let’s hope we will hear more from the oceanographer in the coming days.

Together For A Long Time

Well, the scrutiny of the world is undeniable when one starts rising to fame and even more special when you belong to an LGBTQ+ community. At least, that’s the cliché. However, this beautiful couple managed to survive the predetermined idea and is enjoying a blissful marriage today.

Former UFC Women’s Strawweight Champion, Jessica Andrade, and Fernanda Gomes are celebrating their togetherness for almost a decade now. In an interview from 2013, Jessica gushingly revealed about celebrating two years of relationship with Fernanda.

Fernanda Gomes’ wife, Jessica, proposed her romantically amidst friends and families in February 2017. Gomes posted the auspicious moment on Instagram and thanked her for surprising and asking her hands during the presence of her family. She also promised to keep Jessica happy.

Well, the honeymoon phase never ended for this couple, and we can witness an excerpt of their life long story in every comment section. Jessica also thanked her then-fiancee and assured her love once again.

Fernanda Gomes’ wife, Jessica, is an epitome of hopeless romantic. She leaves no chance to amaze her beloved human and once again astonished her with a public proposal in 2017.

Although Jessica Andrade lost the match against Joanna Jedrzejczyk in May 2017, she used her post-bout interview to propose her partner, Fernanda. The proposal was accepted then and there without a doubt. They had a grand wedding in 2019.

The wedding was beautiful, and everything seemed perfect. The most impressive thing about Jessica and Fernanda is that they know to appreciate one another. Throughout their Instagram’s posts and even interviews, we witness them cherishing their moments, and the roles they play in one another’s life. Moreover, they are aware of the impact they have made throughout their togetherness and never stops being grateful and love more.

Thus, the key to Jessica and Fernanda’s relationship is their appreciation. Furthermore, Jessica Andrade’s wife supports her during the fight weeks. She takes care of the hate texts and prepares her to face any opponents in the arena.

Likewise, Jessica and Fernanda understand the impact of being a public personality. They rose while facing prejudice on social media, and thus as a lesbian couple, they have earned their space.

While talking to MMA Fighting, Mrs. Andrade professed her duty as a compassionate human while consoling every girl who is forced to deny themselves.

Having a child is a dream come true for any couple as it strengthens their connection and teaches them a whole new meaning of love. And women are the portrayal of divine love itself, so it wouldn’t be unnatural to want babies for two women trying to make a family together.

Speaking to MMA Fighting in 2017, Jessica Andrade’s wife revealed that they planned on having kids in 2020. She talked about doing artificial insemination, fertilize and put them in her uterus so that they could have bits of both.

Fernanda was considerate about Jessica’s career and decided on carrying the child. The big reveal is that the pair wants twins and train jiu-jitsu as soon as they can walk.

Although it’s mid-2020, there are no signs of pregnancy in either of the pair’s Instagram. Let’s hope we get to meet the future UFC champs very soon.

Robbed At A Gun-point

The UFC champion Jessica Andrade and her wife Fernanda experienced an armed robbery in Brazil in May 2019. The couple was in Honda HRV when the car stopped, and culprits forced them to hand over their cellphones before taking the vehicle.

The incident occurred less than a month after Jessica claimed the UFC’s 115-pound title. Andrade’s manager, Tiago Okamura verified the event and confirmed that both Jessica and Fernanda were unharmed. However, Jessica’s car was taken along with phones and credit cards.