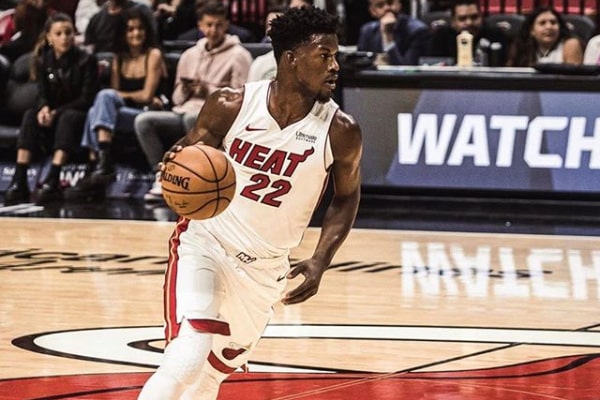 Jimmy Butler is one of the finest NBA players that ever exist. Born on September 14, 1989, Butler is no stranger to the spotlight. May it be his fantastic game day, or his feuds with fellow players’ wives, or his relationship rumors involving some big names of the entertainment industry, he has always found a way to the spotlight. But for now, Butler is a proud father of a baby and is prioritizing families over everything.

However, the Miami Heat star is incredibly hushed about his baby and relationship with his baby-mama. So, let’s find out what’s going on in the love life of secretive Jimmy Butler.

Who Is Jimmy Butler’s Girlfriend?

Jimmy Butler is an incredibly secretive player one could ever witness. He has never discussed his relationship online or in any media presence. Therefore, it is remarkably difficult to track Butler’s girlfriend.

However, few rumors have surrounded Butler linking him to a few spectacularly famous women in the entertainment industry. Some of them include Billy Ray Cyrus‘s daughter, Miley Cyrus, and other top celebrities.

Similarly, the upcoming one is Butler’s most publicized relationship ever. He was caught on a lunch date with Canadian actress Shay Mitchell. According to TMZ, he was seen hanging out with the “Pretty Little Liars” star at Il Pastaio in Beverly Hills in 2016. TMZ also reported that the couple was pretty close and was freshly dating. However, things went cold pretty soon, and they ended their almost ‘perfect’ relationship.

The four-time All-star, Jimmy Butler, is a man with a lot of dating histories with high-end pop-stars. Maybe the personality of Butler of not letting anyone define him is contagious; he attracts a lot of attention. Also, from the homeless to being the NBA’s prominent player, Butler has been in quite a few relationships that allowed him the spotlight.

Jimmy Butler made headlines when the rumors began to flow, linking him with Miley Cyrus. The news sparked when Butler announced that he was attending Cyrus’ show at the B96 Summer Bash with their picture together. According to the Heavy, NBA Central, Terez Owens and others hinted that the pair were pretty close.

However, this was never confirmed, and Butler was known for his love of country-pop music like Miley and Taylor Swift. The possibility is endless but unsupported.

Jimmy Butler Made Headlines After Missing The Heat’s Opener

Jimmy Butler missed the season’s opener for personal reasons. Jimmy Butler’s girlfriend reportedly gave birth to their first daughter, Rylee, together in October 2019. His team announced that he wouldn’t be joining the team on the upcoming road trip after the big news.

“@JimmyButler is now a proud father to a baby daughter. We’re thrilled for him and we’re really excited.” – Coach Spo

Furthermore, Butler seemed excited about his new journey as a daughter’s father. In Butler’s first official week with the Heat, they defeated the Atlanta Hawks 112-97.  According to the US Today, he talked about having a different perspective on life, and things are good for him. He further told things are smooth, he is a father, and he gets to play with some incredible guys for an incredible organization.

Likewise, he was excited to be a father and to hoop at the same time. That’s sweet. Let’s hope Butler becomes an incredible father and enjoys his career to the fullest with his sweetheart.

Who Is Jimmy Butler’s Baby Mama?

Well, Jimmy Butler is the one who refrained himself from posting the adorable smiles of his beautiful daughter Rylee. Yet, here we are expecting some tea about the mother of his first child. Although it is crystal clear that Butler’s only daughter’s mother is Kaitlin Nowak, she has maintained her privacy spontaneously.

According to Sports Gossip, the couple conceived their child in January. The site further goes on to show that she is following Jimmy, etc. The site also reports spotting Butler’s child’s mother, Kaitlin, in the courtside during the game in 2019. This story also follows rumors of Butler flying side chicks to Miami.

As of now, the Miami Heat player is looking out for his family and focusing on his career. Since Butler never speaks about his private matters in public, his secret nature regarding his current relationship is understandable. Let’s hope everything is alright, and Butler shines bright as a father and a player forever.