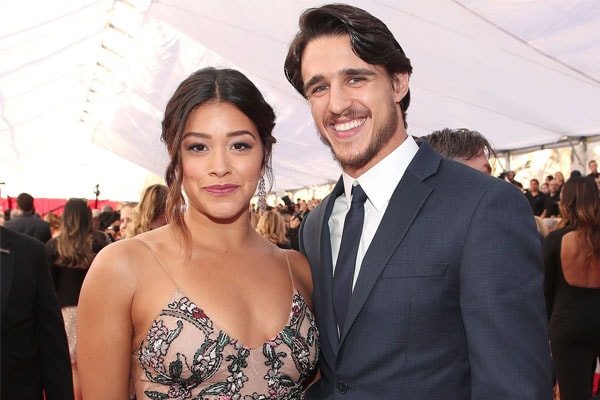 Just like Gina Rodriguez, her fiance Joe LoCicero is also an actor. He is known for different movies such as Spaghettiman, Welcome to Willits and others.

Jane The Virgin star Gina Rodriguez confirmed her engagement to her boyfriend, Joe LoCicero with People back on August 7, 2018.

As stated above Joe LoCicero is an actor. And according to his IMDb profile, he is also a writer. The role of a stripper in Jane The Virgin led Joe LoCicero to meet the love of his life, Gina Rodriguez. Besides his role in Jane The Virgin, he has also appeared in several movies such as Spaghettiman, The Perfect Pitch, Battlefield 1. He is also known as a writer for Cop Chronicles: Loose Cannons: The Legend of the Haj- Mirage. Apart from being an actor, he is also a Muay Thai fighter.

Gina and Joe first met on the set of Jane The Virgin back in 2016 where Joe appeared as the guest actor portraying a role of the stripper. The beautiful actress Gina and her soon to be husband were in a romantic relationship since they met on the set. She first showed off her engagement ring on an Instagram post on her 34th birthday.

We can proclaim that Joe LoCicero is one of the lucky guys to have Gina Rodriguez as his fiancee.

The stunning actress Gina revealed about her relationship with Joe by posting pictures of their vacation in Thailand back in 2016. Both Gina and her fiance Joe use every chance they get to post each other’s cute pictures in their social media. The caption for the photos which she writes shows her immense and genuine love for Joe. We can say for sure that they are so in love with each other.

No wonder the famous American actress Gina Rodriguez’s fiance Joe LoCicero has multiple talents just like her. They seem to be one the cutest couple and fans are eager to witness their wedding.